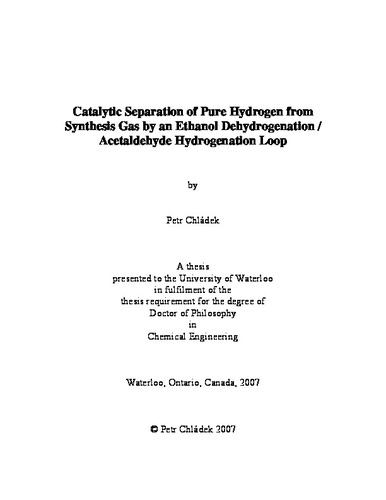 A novel catalytic process for producing high-purity, elevated-pressure hydrogen from synthesis gas was proposed and investigated. The process combines the advantages of low investment and operating costs with the flexibility to adapt to a small-scale operation. The process consists of a loop containing two complementary reactions: ethanol dehydrogenation and acetaldehyde hydrogenation. In one part of the loop, hydrogen is produced by dehydrogenation of ethanol to acetaldehyde. Since acetaldehyde is a liquid under standard conditions, it can be easily separated and pure hydrogen is obtained. In the other part of the loop, hydrogen contained in synthesis gas is reacted with acetaldehyde to produce ethanol and purified carbon monoxide. Ethanol, also a liquid under standard conditions, is easily removed and purified carbon monoxide is obtained, which can be further water-gas shifted to produce more hydrogen. Various dimensionless criteria were evaluated to confirm there was no significant effect of heat and mass transfer limitations and thus the experimental results represent true kinetics. Furthermore, a thermodynamic study was conducted using a Gibbs free energy minimization model to identify the effect of reaction conditions on ethanol/acetaldehyde conversion and determine the thermodynamically favourable operating conditions. Various catalysts were synthesized, characterized and screened for each reaction in a down-flow, fixed-bed quartz reactor. A novel gas chromatography analysis method allowing for an on-line detection of all products was also developed. Unsupported copper in the form of copper foam and copper supported on three different high surface supports were evaluated in ethanol dehydrogenation. Copper foam provided the lowest activity, because of its low surface area. Cu/SiO2 was the most active catalyst for ethanol dehydrogenation. The effects of temperature, pressure, residence time, and feed composition on ethanol conversion and product composition were determined. While increasing temperature or residence time resulted in increased ethanol conversion, elevated pressure and water content in the feed had no effect on ethanol conversion. On the other hand, acetaldehyde selectivity decreased with increasing temperature, pressure and residence time, as acetaldehyde participated in undesirable transformations to secondary products, out of which the most dominant was ethyl acetate. The maximum operating temperature was limited by the stability of the copper catalyst, which deactivated by sintering at temperatures higher than 300°C. The range of temperatures investigated was from 200°C to 350°C, while pressures ranged from atmospheric to 0.5 MPa. For ethanol:water ratios <1, the addition of water to the ethanol feed improved the catalyst stability and acetaldehyde selectivity, but a detrimental effect was observed at higher ratios. The introduction of acetaldehyde into the feed always lowered the conversion, thus indicating a need for stream purification within the loop. An empirical kinetic model was used to determine the activation energy, the order of reaction and the frequency factor. Unsupported and SiO2-supported copper catalysts were compared in acetaldehyde hydrogenation. Pure copper was identified as the best catalyst. Effects of temperature, pressure, residence time, feed composition and catalyst promoter on acetaldehyde conversion and product composition were evaluated. The acetaldehyde hydrogenation was enhanced by increased temperature, pressure and residence time and suppressed in presence of Fe or Zn promoters. Once again, at elevated temperature and residence time, ethanol combined with acetaldehyde to produce undesired ethyl acetate. CO acted as an inert when testing with the pure copper catalyst, but slightly decreased conversion with the supported catalyst. A decrease in conversion was also observed with the introduction of water and ethanol in the feed, once again indicating a requirement for feed purity within the loop. A temperature range of 150-300°C was investigated with catalysts deactivating at temperatures exceeding 250°C. A pressure range identical to ethanol dehydrogenation was used: 0.1-0.5 MPa. Again, an empirical kinetic model allowed determination of the activation energy, the order of reaction and the frequency factor.