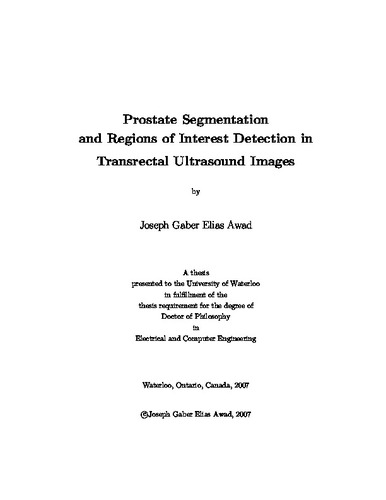 The early detection of prostate cancer plays a significant role in the success of treatment and outcome. To detect prostate cancer, imaging modalities such as TransRectal UltraSound (TRUS) and Magnetic Resonance Imaging (MRI) are relied on. MRI images are more comprehensible than TRUS images which are corrupted by noise such as speckles and shadowing. However, MRI screening is costly, often unavailable in many community hospitals, time consuming, and requires more patient preparation time. Therefore, TRUS is more popular for screening and biopsy guidance for prostate cancer. For these reasons, TRUS images are chosen in this research. Radiologists first segment the prostate image from ultrasound image and then identify the hypoechoic regions which are more likely to exhibit cancer and should be considered for biopsy. In this thesis, the focus is on prostate segmentation and on Regions of Interest (ROI)segmentation. First, the extraneous tissues surrounding the prostate gland are eliminated. Consequently, the process of detecting the cancerous regions is focused on the prostate gland only. Thus, the diagnosing process is significantly shortened. Also, segmentation techniques such as thresholding, region growing, classification, clustering, Markov random field models, artificial neural networks (ANNs), atlas-guided, and deformable models are investigated. In this dissertation, the deformable model technique is selected because it is capable of segmenting difficult images such as ultrasound images. Deformable models are classified as either parametric or geometric deformable models. For the prostate segmentation, one of the parametric deformable models, Gradient Vector Flow (GVF) deformable contour, is adopted because it is capable of segmenting the prostate gland, even if the initial contour is not close to the prostate boundary. The manual segmentation of ultrasound images not only consumes much time and effort, but also leads to operator-dependent results. Therefore, a fully automatic prostate segmentation algorithm is proposed based on knowledge-based rules. The new algorithm results are evaluated with respect to their manual outlining by using distance-based and area-based metrics. Also, the novel technique is compared with two well-known semi-automatic algorithms to illustrate its superiority. With hypothesis testing, the proposed algorithm is statistically superior to the other two algorithms. The newly developed algorithm is operator-independent and capable of accurately segmenting a prostate gland with any shape and orientation from the ultrasound image. The focus of the second part of the research is to locate the regions which are more prone to cancer. Although the parametric dynamic contour technique can readily segment a single region, it is not conducive for segmenting multiple regions, as required in the regions of interest (ROI) segmentation part. Since the number of regions is not known beforehand, the problem is stated as 3D one by using level set approach to handle the topology changes such as splitting and merging the contours. For the proposed ROI segmentation algorithm, one of the geometric deformable models, active contours without edges, is used. This technique is capable of segmenting the regions with either weak edges, or even, no edges at all. The results of the proposed ROI segmentation algorithm are compared with those of the two experts' manual marking. The results are also compared with the common regions manually marked by both experts and with the total regions marked by either expert. The proposed ROI segmentation algorithm is also evaluated by using region-based and pixel-based strategies. The evaluation results indicate that the proposed algorithm produces similar results to those of the experts' manual markings, but with the added advantages of being fast and reliable. This novel algorithm also detects some regions that have been missed by one expert but confirmed by the other. In conclusion, the two newly devised algorithms can assist experts in segmenting the prostate image and detecting the suspicious abnormal regions that should be considered for biopsy. This leads to the reduction the number of biopsies, early detection of the diseased regions, proper management, and possible reduction of death related to prostate cancer.