The 38th Parallel: Penetrating the Line 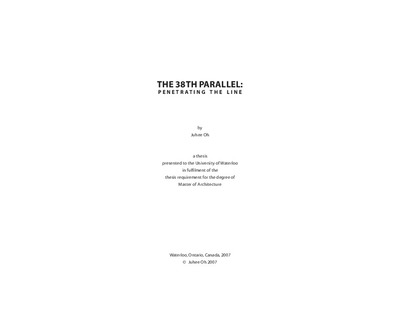 In July 1953, the armistice ended the Korean War that lasted for three years and established the Demilitarized Zone on either side of the demarcation line as a buffer between the two countries to prevent further military confrontation. However, the two sides remain at odds for half a century, and, despite the armistice, a state of war still exists between the two Koreas. As Koreans have dreamed of a united nation, the division has been described as a ‘temporary’ term to Koreans, yet the process of it has been much more obscure. Half a century has passed by, and South Korea has become a nation in which all facets of economic, political, and cultural identity are delineated in opposition to North Korea. What the future was supposed to present to Koreans has shifted relentlessly creating a disparity between the individual and national dreams. With repetitive see-saw events of national tension and reconciliation, individuals find themselves in an ambivalent position between series of oppositions: people and state, real and unreal, unification and national division. Multiple narratives crossover, creating confusion of whether the ultimate dream of Korea is even appropriate. The thesis examines the two opposing conditions: the idealized dream of homogeneity, and the factual reality of heterogeneity. Four series of investigations are presented in this thesis: the condition, the cause, the response, and the location of the individual. First, the disparity between the two Koreas illustrates the external conditions of the situation. Then an investigation of the Korean identity is presented to analyze the cause of the condition. The indigenous identity of Korea and the desire to preserve it are presented as the creative forces behind the dichotomy of Korea. The ambivalence of the individual is understood as a response such conditions. The concept of ‘Han’ is employed as a possible vehicle of understanding Korean cultural despondency. Finally the design exploration of a very significant archaeological site in the Demilitarized Zone is undertaken in order to mediate the disparity between the Korean dream and reality for the individual. The design is intended to locate the individual within the Korean pathology. Playing on the previously studied Korean conditions, the design is an amplified display of the opposing conditions which will enable the individual to face the ambivalence of today’s Korea. The thesis does not suggest the solution or envision the end but aims to meditate and negotiate the present moment. It is not my intention to force either fantasy or reality as an absolute answer, but to create an understanding of both conditions in hopes that Koreans can start to break their ambivalence regarding their national reunification.