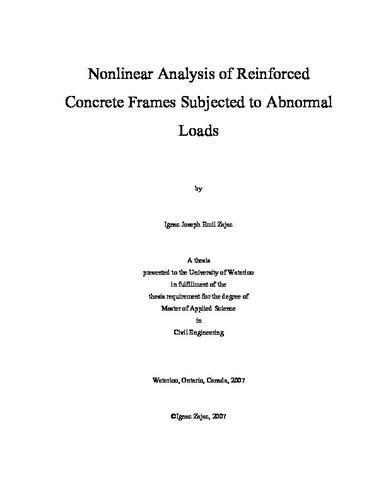 The purpose of this study is to analyze reinforced concrete frames subjected to abnormal loads. Structures are rarely subjected to abnormal loads, however, when they are subjected to them, it can lead to a progressive collapse. The World Trade Centers in New York City and the Alfred P. Murrah building in Oklahoma City are examples of structures being deliberately subjected to abnormal loads. Structures can also experience unintentional abnormal loading. Examples include the Ronan Point apartment building in Canning Town, England and Husky Stadium at the University of Washington. Consequently, many analysis and design standards now explicitly account for abnormal loads and try to mitigate their effects. This study presents the development of a nonlinear computer analysis program for reinforced concrete frames. The method of analysis involves discretizing a two dimensional reinforced concrete frame into a series of beam-column elements. The element is linear-elastic, however, its end-sections model nonlinear behaviour of a total member by a series of springs. The springs represent the post-elastic stiffness of the end-sections. The post-elastic stiffness of a member-section is obtained from a post-elastic force-deformation response, which is first obtained by performing sectional analysis on a reinforced concrete section using a public domain computer program. The post-elastic force-deformation responses are modeled as either bilinear or trilinear. So-called stiffness degradation factors, which are defined as the ratio of elastic to elastic plus post-elastic deformation of a member-section, are used in modifying the elastic stiffness coefficients in the element stiffness matrix to account for the nonlinear behaviour. Once a reinforced concrete frame enters the post-elastic range of response the analysis procedure becomes incremental. The stiffness degradation factors are calculated at each load increment and the degree of post-elastic stiffness degradation is progressively tracked throughout the load history. The program also has the capability of performing a progressive collapse analysis whereby debris loads caused by falling members are calculated and applied to the structure. A series of example problems are presented to demonstrate the computer analysis program.