Integrated Fluorescence Detection System for Lab on a Chip Devices 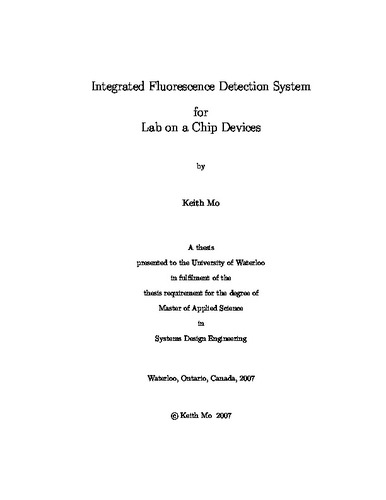 This thesis focuses on the design of a versatile, portable, and cost-effective fluorescence detection system for LOC devices. Components that are widely available are used, such as LEDs for excitation and a microcontroller for processing. In addition, a photoresistor is tested for the feasibility of being used as a fluorescence detector, instead of the more commonly used photomultiplier tubes. The device also focuses on upgradeability and versatility, meaning that most of the major components can be replaced as long as power requirements remain unaffected. This allows for future additions to the device once they are available, as well as giving the user the power to choose which add-ons are needed since not all users may have the same requirements. The performance of the device after testing with fluorescein dyes and stained yeast cells indicate that it is capable of executing simple tasks, such as determining the presence and concentration of an analyte if given a sufficient amount. It also provided similar readings to commercial fluorescence analysers, which proves its ability to function as a fluorescence detector device. The thesis also proposes a MEMS diffraction grating that can be used for wavelength tuning. By being able to selectively measure across a range of wavelengths, the capability of the device is increased. Examples include being able to detect multiple fluorescent emissions, which will complement the multicoloured excitation LED nicely. In addition, the device will not be limited to a predetermined set of filters. This effectively allows more fluorescent dyes to be used with the device since any wavelength in the visible range can be selectively filtered for. Simulations of the proposed diffraction grating were performed in ANSYS to confirm the validity of the calculated values. In addition, tests were performed on a slide fabricated with diffraction gratings using values as close to the calculated values as possible. All of the results indicate that there is great promise in the proposed diffraction grating design and that it should be further investigated.