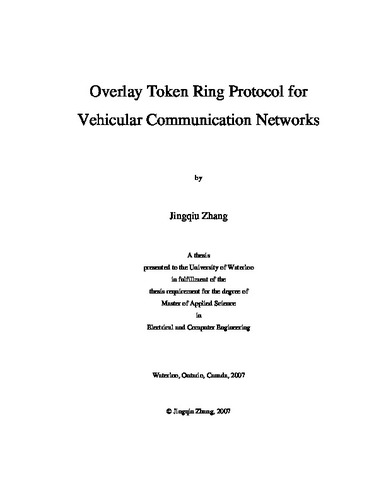 Vehicular communication has been an emerging topic among current wireless research. The vehicular communication can be classified to Inter-Vehicle Communication (IVC) and Road-to-Vehicle Communication (RVC). IVC and RVC support applications mainly on two aspects: safety applications aiming to reduce dangers on the road, and data applications aiming to provide information and entertainment to people on traveling. Vehicles nearby form Vehicular Ad hoc Networks (VANETs) without any fixed infrastructures. Due to the characteristics of vehicular networks such as quickly changing and unstable network topology, IVC has special requirements to the network protocols. Several MAC protocols have been appeared or improved based on previous work for IVC. But these protocols are designed either for QoS guaranteed data service or for reliable message broadcast. There is not a protocol including both application requirements and inexpensive to implement as well. MAC protocol for vehicular communication hasn’t been finalized. In this thesis, an overlay token ring protocol (OTRP) is proposed which can work on MAC layer with broadcast function and taking into the IVC features into consideration. In OTRP, vehicles are grouped to overlapped rings with a token passed in each ring as the sole right for transmission. The ring is dynamically updated in a distributed manner based on smart algorithm at each node. OTRP provides bounded delay by assigning maximum token holding time for each node. It also reduces collisions by decreasing the number of contention nodes by times of ring size. Fair and high throughput is obtained as well. Furthermore, it provides reliable and prompt broadcast of emergency messages by pre-emptively transmitting while applying the token as an acknowledgement. The time nodes reliably receive the message is within limit. Theoretical analysis is provided and simulation results are given to evaluate the performance of OTRP under saturated traffic conditions both in safety and data applications.