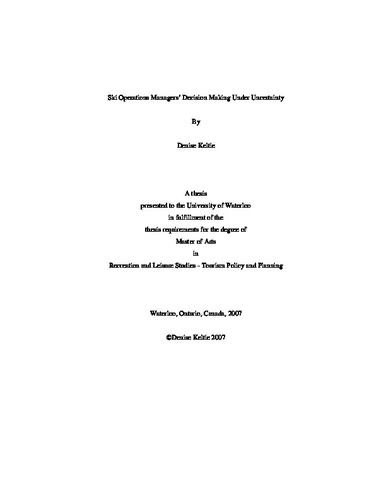 Abstract This study explores decision making amongst ski area management. In particular, it examined how ski area managers are challenged by the risk and uncertainty as a result of weather and visitor activity patterns. Prospect theory suggests that response to uncertain conditions may not result from the application of rational thought processes (Tversky & Kahneman, 2000). Instead, decision makers may fall victim to any number of seemingly arbitrary rules or processes as they attempt to deal with uncertainty. Ski operations in southern British Columbia were chosen for study because of the importance of ski operations to the economy of this region as well as the challenging and variable weather events they have recently experienced. For example, this area hosts international and regional visitors as well as major events like the Vancouver 2010 Olympics and Paralympic Games events. As a result, there is considerable interest in creating ski conditions that are of international calibre. However, the Vancouver and the Coast Mountains faced a weather anomaly of warm, wet weather in January 2005. Nearby regions experienced equally problematic weather conditions the following December. The task here was to discover how ski area managers were coping with the uncertainty created by variable weather patterns. This study utilized qualitative methods. In total, 16 ski area managers participated in semi-structured interviews between the months of November 2006 and March 2007. Interviews were conducted within three British Columbia tourism regions: Vancouver and Coast Mountains, Thompson Okanagan, and Kootenay Rockies. The most common weather disturbances to selectively or entirely impact ski operations were high winds, cold temperatures, avalanche hazards, and lightning. Managers used both rules and tools to deal with the uncertainty created by weather conditions. In terms of rules, they often relied upon heuristic strategies (cognitive rules of thumb) to help with decision making. They tended to open and close at the same time each year for example. Often these heuristics were based on historical weather data and skier visitation rates. Many managers reported being unaffected by existing biases in their decision making or falling victim to escalation of commitment (often reported in decision making studies). These managers also relied on a variety of tools to reduce uncertainty during decision making. These tools included the use of management teams, reliance on experience and individual expertise, historical weather and skier data, and reliance upon business models. For example, most of those interviewed reported extensive efforts to enhance operational sustainability. They focused on diversification (of winter products and year round activities), slope development (summer grooming), snowmaking, and environmental sustainability initiatives. In each case, the goal seemed one of reducing uncertainty in an inherently uncertain situation. Industry and market trends were impacted by improved ski technology and the increasing popularity of internet and last minute holiday bookings.