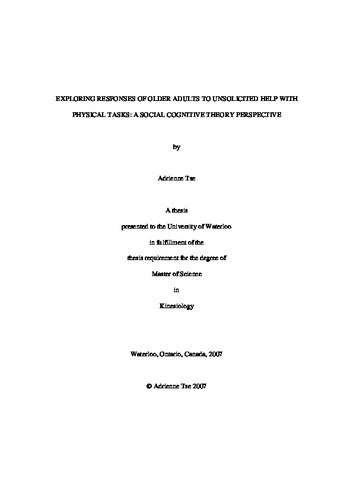 Continually improving population health in the context of increased life expectancy challenges the assumption that aging invariably leads to significant physical decline. Currently, there is a perception that physical function and hence, independence, can be maintained well into later life (Ory, Hoffman, Hawkins, Sanner & Mockenhaupt, 2003). Given the growing proportion of older adults in many industrialized nations, it is imperative to consider possible factors that influence behaviour, which may in turn contribute to functional losses that have hitherto been attributed to aging. For example, pervasive ageist stereotypes may play a role in reducing older adults’ opportunities to independently perform physical tasks (i.e. removal of difficult or challenging physical tasks from older adult residences; younger individuals insisting on physical help that is unneeded) so that ability is gradually compromised by disuse. This study explores the potential for such reduced opportunity among community-dwelling older adults using a questionnaire-based methodology and hypothetical stimulus scenarios. In the scenarios, participants’ mature children offer the older adults unsolicited help with two functional tasks: rising from a sofa and grocery shopping. The 52 study participants (mean age = 78.4 ± 6.0 years) were each asked to report their independence preference, anticipated affective responses, behavioural intentions, self-efficacy for relevant physical skills, relation-inferred self-efficacy (RISE), attribution for why the help was offered, and perceived benefits of accepting and declining the help. Using a Social Cognitive Theory (SCT) framework, individuals with higher self-efficacy, stronger preference for independence, or more perceived benefits of declining relative to those of accepting help were expected to be more likely to intend to decline assistance. In addition to being related to intentions, these factors, along with lower RISE beliefs, were expected to be associated with greater negative affect. Finally, RISE was anticipated to be directly proportional to self-efficacy and thus, attribution of the offered help to physical (versus social) reasons was hypothesized to relate to lower self-efficacy and RISE. Primary study hypotheses were generally not supported, with a few exceptions. First, as hypothesized, those who perceived more benefits associated with declining help were more likely to decline and less likely to accept the offered help (p ≤ 0.005). Second, the more perceived benefits associated with declining help (relative to those associated with accepting help), the less total positive affect older adults reported (r ≤ -0.31, p ≤ 0.02). Third, individuals who had higher self-efficacy also reported higher RISE (r ≥ 0.34, p ≤ 0.01). Finally, those who made physical attributions for the offer of help reported lower RISE (p ≤ 0.009), and lower shopping self-efficacy (p = 0.004). Secondary analyses provided some insight into the lack of support for study hypotheses regarding the receipt of unsolicited assistance. For example, both high self-efficacy beliefs (mean = 85.1 ± 15.8% for rising and 91.5 ± 11.2% for shopping) and low TUG times (mean = 12.2 ± 4.7s) suggested that the sample was particularly high-functioning. This would help to explain why self-efficacy was not found to be significantly related to participant intentions to accept help. Another explanation for this finding is the influence of social factors considered by older adults in these helping situations. Participant intentions could have been based on anticipated social rather than physical benefits. This rationale was supported by high rates of selection for socially-relevant perceived benefits of receiving help. Further examination also confirmed that participants generally reported very low levels of total negative affect. This would partially account for the absence of a relationship between perceived benefits and negative affect, even though the former was shown to be correlated with total positive affect. Despite raising as many questions as it answers, the present study succeeds in illustrating the perceptions of higher functioning older adults in situations where physical help is offered to them. Although these participants would not require any help with the physical tasks presented, on average, older adults indicated that they would likely accept the offered assistance approximately half of the time. When the findings of the two sets of analyses are considered, they suggest that much research is needed to understand the perspective of older adults in helping situations. Assumptions about older adults’ reactions to receiving assistance with physical tasks may not be straightforward. Having the ability to function independently may not necessarily mean that older adults refuse assistance. Like younger adults, they may interpret the social situation in terms of a variety of outcomes. Indeed, if researchers do not consider complex interpretations for how older adults function in regard to physical independence, they may be letting personal ageism shape their research. Consequently, there is cause to pursue further research in this underserved area of investigation into the perceptions and actions of older adults. Future studies in this vein may make use of the lessons learned from this exploratory investigation.