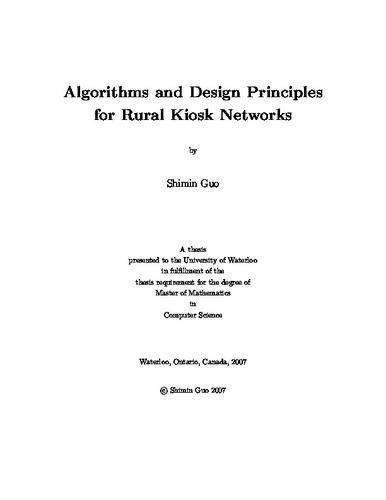 The KioskNet project aims to provide extremely low-cost Internet access to rural kiosks in developing countries, where conventional access technologies, \eg\, DSL, CDMA and dial-up, are currently economically infeasible. In the KioskNet architecture, an Internet-based proxy gathers data from the Internet and sends it to a set of edge nodes, called ``gateways'' from which ferries, such as buses and cars, opportunistically pick up the data using short-range WiFi as they drive past, and deliver it wirelessly to kiosks in remote villages. The first part of this thesis studies the downlink scheduling problem in the context of KioskNet. We pose the following question: assuming knowledge of the bus schedules, when and to which gateway should the proxy send each data bundle so that 1) the bandwidth is shared fairly and 2) given 1), the overall delay is minimized? We show that an existing schedule-aware scheme proposed in the literature, \ie\, EDLQ~\cite{JainFP04}, while superficially appearing to perform well, has some inherent limitations which could lead to poor performance in some situations. Moreover, EDLQ does not provide means to enforce desired bandwidth allocations. To remedy these problems, we employ a token-bucket mechanism to enforce fairness and decouple fairness and delay-minimization concerns. We then describe a utility-based scheduling algorithm which repeatedly computes an optimal schedule for all eligible bundles as they come in. We formulate this optimal scheduling problem as a minimum-cost network-flow problem, for which efficient algorithms exist. Through simulations, we show that the proposed scheme performs at least as well as EDLQ in scenarios that favour EDLQ and achieves up to 40\% reduction in delay in those that do not. Simulation results also indicate that our scheme is robust against the randomness in actual timing of buses. The second part of the thesis shares some of our experience with building and testing the software for KioskNet. We subjected a prototype of the KioskNet system, built on top of the DTN reference implementation, to stress tests and were able to identify and fix several software defects which severely limited the performance. From this experience, we abstract some general principles common to software that deals with opportunistic communication.