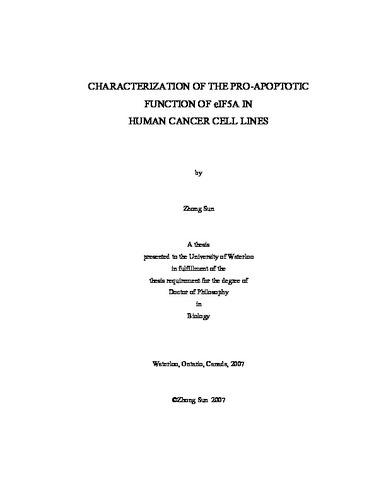 Eukaryotic translation initiation factor 5A (eIF5A) is the only known protein containing the unique amino acid, hypusine. eIF5A is present in all eukaryotic cells and is highly conserved, but its function is not well understood. The present investigation was undertaken to study the regulatory role of eIF5A in the induction of apoptosis in human cancer cell lines. Suppression of eIF5A1 using specific siRNA was shown to have no effect on the growth and proliferation of mammalian cells, although inhibition of the post-translational hypusination of eIF5A1 resulted in G1 phase cell cycle arrest. Treatment of HT-29 human colon adenocarcinoma cells with eIF5A1 siRNA did, however, reduce their sensitivity to pro-apoptotic stimuli including nitric oxide, Actinomycin D, proteaosome inhibition and serum starvation. Furthermore, over-expression of eIF5A1 in HT-29 cells or Hela S3 human cervical carcinoma cells using adenovirus constructs strongly induced apoptosis in a time-dependent manner. The pro-apoptotic effect of eIF5A1 appears to reflect at least in part its ability to activate the mitochondrial pathway of apoptosis in that its up-regulation resulted in dissipation of mitochondrial ∆Ψm, release of cytochrome c, activation of caspase 9 and caspase 3 and translocation of Bax from the cytosol to mitochondria. Similar effects were observed following treatment with eIF5A2, a second isoform of human eIF5A, and in addition eIF5A2 induced up-regulation of cleaved Bcl-2 which is thought to be pro-apoptotic. A mutant of eIF5A1 in which the conserved lysine, lysine50, that is post-translationally modified to hyusine was switched to alanine [eIF5A1(K50A)] also proved capable of inducing apoptosis by activating the mitochondrial pathway. As well, eIF5A1 and eIF5A1(K50A) both induced strong up-regulation of p73, a homolog of the tumor suppressor p53, in Hela S3 cells containing null p53. The finding that up-regulation of eIF5A1 also resulted in activation of caspase 8 indicates that it may be involved in regulation of the death receptor pathway of apoptosis as well. This contention is further supported by confocal microscopy studies indicating that, following its up-regulation, eIF5A1 localizes to the inner surface of the plasma membrane in a time-dependent manner that correlates temporally with the induction of apoptosis. eIF5A1 and its post-translationally modified forms were isolated by 2-dimensional Western blotting and sequenced by mass spectrometry. These analyses indicated that eIF5A1 containing unmodified lysine50 is the form of the protein that accumulates coincident with induction of apoptosis either by up-regulation of eIF5A1 or treatment with NO. These observations, together with the finding that eIF5A1(K50A) is capable of inducing apoptosis, indicate that it is the unhypusinated form of eIF5A1 that is apoptogenic.