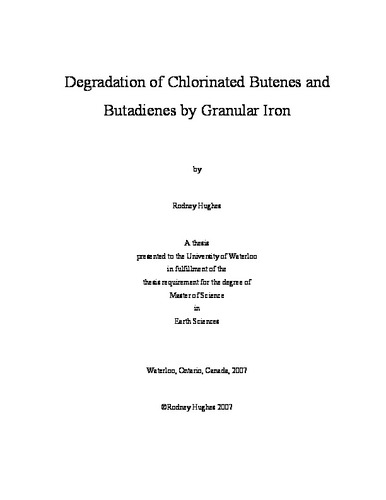 Sites where 2-chlorobutadiene-1,3 (chloroprene) and 2,3-dichlorobutadiene-1,3 (DCBD) are synthesized for use in chlorobutyl rubber have the potential to release a mixture of at least five chlorinated butenes and butadienes including trans-1,4-dichlorobutene-2 (1,4-DCB-2), 3,4-dichlorobutene-1 (3,4-DCB-1), 2,3,4-trichlorobutene-1 (2,3,4-TCB-1), chloroprene and DCBD into the groundwater environment. Granular iron has been shown to be effective in the remediation of groundwater contaminated with chlorinated organic compounds by reductive dechlorination. To evaluate the possibility of using granular iron in the remediation of the above contaminants a series of batch and column experiments were conducted at the laboratory scale. Chlorine mass balance calculations showed that each compound, with the exception of DCBD, could be fully dechlorinated by the use of granular iron. Kinetic data and proposed reaction pathways, however, suggest that DCBD can also be fully dechlorinated by granular iron. Normalization of observed pseudo-first-order reaction half-lives indicated that compounds were degrading much slower in batch experiments than in column experiments. This, along with the observation that temperature did not affect degradation in batch experiments, led to the conclusion that mass transport to the iron surfaces was limiting degradation rates in batch experiments. Results showed that the three chlorinated butenes degraded much faster (normalized column half-lives ranged from 1.6 to 5.2 min) than the two chlorinated butadienes (normalized column half-lives ranged from 115 to 197 min). Chlorinated and non-chlorinated intermediates were identified. It was determined that all contaminants degrade to 1,3-butadiene as a reaction intermediate which then degraded to a mixture of non-harmful end products consisting of 1-butene, cis-2-butene, trans-2-butene and n-butane. The reaction pathway from 1,4-DCB-2 to 1,3-butadiene was proposed to be a reductive elimination similar to reductive β-elimination. 3,4-DCB-1 and 2,3,4-TCB-1 were proposed to undergo reductive β-elimination reactions resulting in 1,3-butadiene and chloroprene intermediates, respectively. Degradation of chloroprene and DCBD occurred via hydrogenolysis pathways while 1,3-butadiene underwent catalytic hydrogenation resulting in the observed end products. The results suggest that granular iron may be an effective treatment for groundwater contaminated with these compounds.