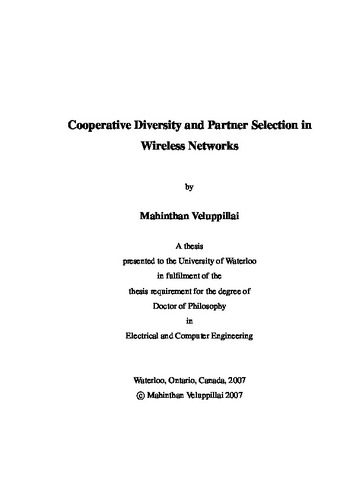 Next generation wireless communication systems are expected to provide a variety of services including voice, data and video. The rapidly growing demand for these services needs high data rate wireless communication systems with reliability and high user capacity. Recently, it has been shown that reliability and achievable data rate of wireless communication systems increases dramatically by employing multiple transmit and receive antennas. Transmit diversity is a powerful technique for combating multipath fading in wireless communications. However, employing multiple antennas in a mobile terminal to achieve the transmit diversity in the uplink is not feasible due to the limited size of the mobile unit. In order to overcome this problem, a new mode of transmit diversity called cooperative diversity (CD) based on user cooperation, was proposed very recently. By user cooperation, it is meant that the sender transmits to the destination and copies to other users, called partners, for relaying to the destination. The antennas of the sender and the partners together form a multiple antenna situation. CD systems are immuned not only against small scale channel fading but also against large scale channel fading. On the other hand, CD systems are more sensitive to interuser (between sender and partner) transmission errors and user mobility. In this dissertation, we propose a bandwidth and power efficient CD system which could be accommodated with minimal modifications in the currently available direct or point-to-point communication systems. The proposed CD system is based on quadrature signaling (QS). With quadrature signaling, both sender’s and partners’ information symbols are transmitted simultaneously in his/her multiple access channels. It also reduces the synchronization as well as the interference problems that occur in the schemes reported in the literature. The performance of the proposed QS-CD system is analyzed at different layers. First, we study the bit error probability (BEP) of the QS-CD system for both fixed and adaptive relaying at the partner. It is shown from the BEP performance that the QS-CD system can achieve diversity order of two. Then, a cross-layer communication system is developed by combing the proposed QS-CD system at the physical layer and the truncated stop-and- wait automatic repeat request (ARQ) at the data link layer. The performance of the cross-layer system is analyzed and compared with existing schemes in the literature for performance metrics at the data link layer and upper layers, i.e., frame error rate, packet loss rate, average packet delay, throughput, etc. In addition, the studies show that the proposed QS-CD-ARQ system outperforms existing schemes when it has a good partner. In this respect, the proposed system is fully utilizing the communication channel and less complex in terms of implementation when compared with the existing systems. Since the partner selection gives significant impact on the performance of the CD systems, partner selection algorithms (PSAs) are extensively analyzed for both static and mobile user network. In this case, each individual user would like to take advantage of cooperation by choosing a suitable partner. The objective of an individual user may conflict with the objective of the network. In this regard, we would like to introduce a PSA which tries to balance both users and network objectives by taking user mobility into consideration. The proposed PSA referred to as worst link first (WLF), to choose the best partner in cooperative communication systems. The WLF algorithm gives priority to the worst link user to choose its partner and to maximize the energy gain of the radio cell. It is easy to implement not only in centralized networks but also in distributed networks with or without the global knowledge of users in the network. The proposed WLF matching algorithm, being less complex than the optimal maximum weighted (MW) matching and the heuristic based Greedy matching algorithms, yields performance characteristics close to those of MW matching algorithm and better than the Greedy matching algorithm in both static and mobile user networks. Furthermore, the proposed matching algorithm provides around 10dB energy gain with optimal power allocation over a non-cooperative system which is equivalent to prolonging the cell phone battery recharge time by about ten times.