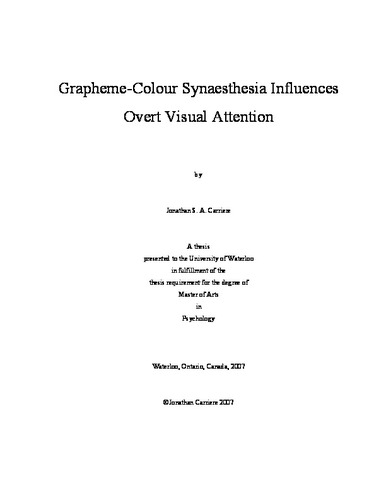 Synaesthesia is a fascinating condition in which ordinary stimuli elicit extraordinary sensory experiences. For example, specific tastes may elicit unusual tactile sensations and standard black letters may elicit highly specific colour experiences. These unusual experiences have been shown to have substantial impact on cognition, emotion, perception, and covert attention. Two experiments are presented which show that synaesthesia also influences overt visual attention. In these experiments two grapheme-colour synaesthetes viewed coloured letters while their eye movements were tracked. Letters were presented in colours that were either congruent or incongruent with the synaesthetes' colours. Eye tracking analysis showed that synaesthetes exhibited a colour congruity bias – a propensity to fixate congruently coloured letters more often and for longer durations than incongruently coloured letters – in a naturalistic free viewing task. In a more structured visual search task, this congruity bias caused synaesthetes to rapidly fixate and identify congruently coloured target letters, but led to problems in identifying incongruently coloured target letters. The results are discussed in terms of their implications for perception in synaesthesia.