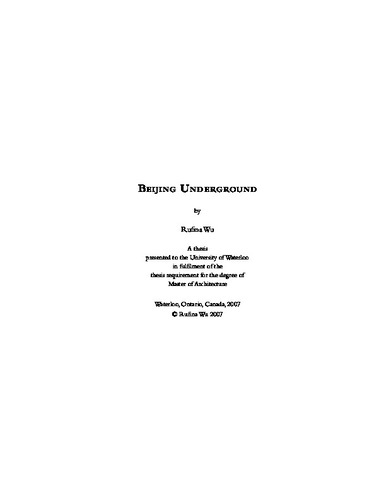 This thesis investigates a unique type of migrant housing in Beijing: underground hostels retrofitted from civil air defence basements. The core of this study consists of field research conducted from 2005-2006. Personal narratives, photographs, maps, and illustrations drawn from first-person experience construct an account of a neglected layer of the city. Political and economic reforms since the late 1970s initiated the formation of a new subaltern class in contemporary Chinese cities known as the floating population. Millions of migrants have flowed through China’s uneven economic landscape in pursuit of the Chinese Dream. There is an estimated 4 million migrants actively contributing to the construction of new Beijing, yet the subalterns are excluded from official State representations that focus on the monumental. Without proper household registration (hukou) status, rural migrants have little to no access to social welfare including subsidized housing. Migrants have, of necessity, developed unconventional habitats in the capital city. In the absence of officially sanctioned space, migrants seek shelter within cracks and fissures of the formal system. Just as the city is being shaped by the flow of capital, the inflow of the floating population shapes an alternative urban geography that remains largely invisible. Sanctioned yet unofficial, the migrants’ creative appropriation of space contributes to the development of an emergent urban vernacular. Portraits from below reveal furtive portions of Beijing: marginal, banal, and hidden stages upon which life unfolds.