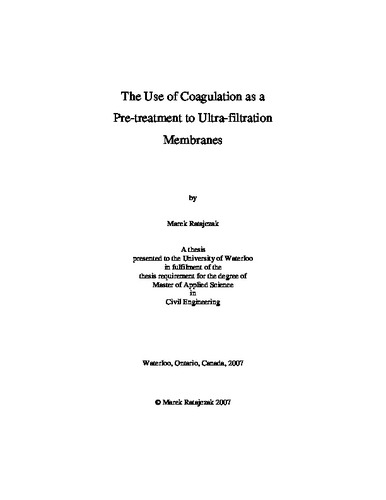 ABSTRACT With an increasing population density throughout the world and the current drive to provide fresh water to as many people as possible, innovative methods of providing safe drinking water are in very high demand. In 2002, the United Nations stated in their millennium declaration that one of their priority goals was “to halve, by the year 2015, the proportion of people who are unable to reach or to afford safe drinking water” (UNESCO, 2000). This goal was set with high standards, and will require a great deal of water treatment related research in the short coming years. Over the past two decades, drinking water treatment via membrane filtration has been widely accepted as a feasible alternative to conventional drinking water treatment. Membrane processes are used in environmental, chemical, food, beverage, pharmaceutical, and various other industries for separation applications. Since the early 1990’s, there has been rapid growth in the use of low-pressure hollow fibre membrane processes for the production of drinking water. These membrane systems are increasingly being accepted as feasible technologies for drinking water treatment. Like with any innovative process, it has limitations; the primary limitation being membrane fouling, which is an accumulation of particles on the surface and inside the pores of the membrane surface. Membrane fouling has the ability to reduce the flux, in doing so, requiring a higher pumping intensity to maintain a consistent volume of water being treated. This project investigated chemical coagulation as a pre-treatment to membrane ultra-filtration, with the goal of mitigating fouling impact in order to maintain a consistent permeate flux, while monitoring several water quality parameters before and after treatment such as turbidity, alkalinity, pH and total organic carbon (TOC). Two different raw water sources were studied: Grand River water taken from the Hidden Valley intake, located in Kitchener, ON, and Lake Ontario water taken from the Woodward Water Treatment Plant in Hamilton, ON. The evaluated coagulants include alum and ferric chloride, which are widely used hydrolyzing metal salt (HMS) coagulants; and three polyaluminum chloride (PACl) products, which are pre-hydrolyzed coagulants formed by the controlled neutralization of aluminum chloride solution. Phase 1 of the project involved the coagulation of water using various aluminum and iron-based coagulants. Synthetic water was used at the outset, followed by the use of raw water obtained from two water treatment plants: one on the Grand River and one on Lake Ontario. A series of jar test trials was conducted to determine optimum coagulant dosages for the removal of NOM. These doses were then used as a baseline for subsequent membrane trials in phase 2 of this project. Phase 2 involved the treatment of raw and coagulated waters with a hollow fibre bench scale UF unit (Zenon Environmental Inc.®, ZeeWeed-1). Membrane trials were performed with the coagulants applied at optimal and sub optimal dosages in order to evaluate the integrated process for mitigation of organic fouling. As all trials were conducted at a constant flowrate, membrane fouling was evaluated by monitoring trans-membrane pressure (TMP) over time. The raw and treated water were fractionated to obtain quantitative information on the size components of NOM contributing most to fouling. Results will be presented comparing how the different coagulants affected the concentration of each NOM MW fraction in the raw and treated waters. Collectively, results showed that all four coagulants substantially decreased the rate of TMP increase, particularly with the Grand River water which contained much higher turbidity and TOC concentrations than the Lake Ontario water. During the trials conducted with Grand River, alum performed best, reducing the TMP by 57 % over a 3-day period. The PACl coagulants performed best at reducing the TMP during the Lake Ontario membrane trials; reducing the TMP by 21 % and 19 % for SP 70 and SP respectively. The system’s ability to maintain a permeate turbidity level of 0.1 NTU or lower was met, and TOC removals varied a small amount across the four coagulants, ranging from 45-65 % and 15-35 % for the Grand River and Lake Ontario trials, respectively.

Marek Ratajczak (2007). The Use of Coagulation as a Pre-treatment to Ultra-filtration Membranes. UWSpace. http://hdl.handle.net/10012/3244