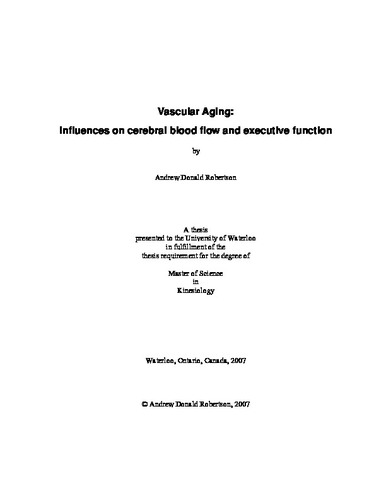 An age-related decline in cerebral blood flow (CBF) is widely acknowledged. However, uncertainty exists as to whether this reduction is the result of a reduced metabolic demand (cerebral atrophy) or an impaired delivery system (cerebrovascular disease). The purpose of these experiments was to examine the relationship of CBF and dynamic cerebrovascular regulation with changes in common carotid intima-media thickness (cIMT), brachial-ankle pulse wave velocity (baPWV) and common carotid distensibility. Additionally, we took an exploratory view into the effect of vascular aging and CBF reduction on brain function, as expressed through the performance of motor and cognitive tasks. An important finding in elderly participants was that seated anterior CBF declined as a function of arterial stiffness, independently of age. Linear regression analysis developed a model that predicts CBF drops 22 ml/min (95% confidence interval (CI): 6, 38) for each 100 cm/s increase in baPWV and 8 ml/min (95% CI: 1, 15) for each additional year in age. The effect of baPWV appears to be mediated through an increase in cerebrovascular resistance (r2 = 0.84, p < 0.0001). Additionally, CBF showed postural dependency and the volume of the drop in CBF between supine and seated positions was greatest in elderly participants (YOUNG: 65 ± 81 ml/min; ELDERLY: 155 ± 119 ml/min; p = 0.001). Despite this negative impact of vascular aging on steady state flow, dynamic regulation does not appear to be affected. Cerebrovascular responses to an acute drop in blood pressure or to activation of the motor cortex were not attenuated in the elderly participants. Finally, seated CBF had modest directionally relevant relationships with perceptuo-motor and complex sequencing processes; while cIMT appeared to influence performance on initiation and inhibition tasks.