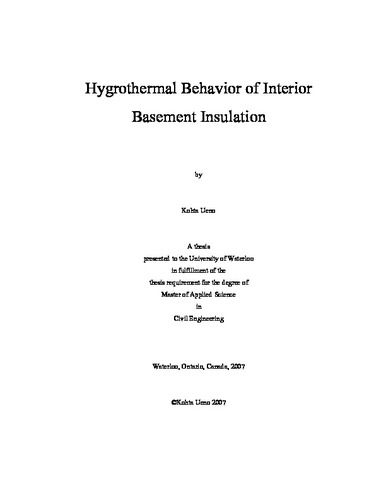 An uninsulated basement can contribute a significant fraction of a building’s total heating load: insulating the basement can provide significant energy savings. In addition, the desire of homeowners to maximize usable space has resulted in the finishing of many basements. However, traditional interior basement wall insulation assemblies and finishes have resulted in a large number of moisture-related failures of these wall systems, including mold, decay, and poor thermal performance. This thesis involves the experimental and analytical investigation of the hygrothermal behavior of interior insulated basement walls. The experimental portion involved the hygrothermal monitoring of twelve interior basement insulation assemblies in two field locations (Huntley, IL, and Kitchener, ON). The measured boundary conditions from field monitoring were then used in one-dimensional hygrothermal simulations. None of the monitored walls experienced conditions that would be considered a moisture-related failure; the data demonstrated that the concrete basement wall will be a source of moisture throughout the year. Another conclusion was that air leakage plays a large role in the behavior of assemblies: performance could not be predicted simply by the permeability of the assembly, or its least permeable layer. Wintertime condensation was not found to be a problem in the monitored walls, with or without an interior vapor control layer. Measurements demonstrated summertime inward vapor drives at the above-grade portions of the walls; condensation was seen in walls with an interior polyethylene vapor barrier, and correlated to an inward thermal gradient. Simulations showed that this issue is likely in climates with a significant cooling load; therefore, locations with negligible cooling loads are unlikely to have these problems. This research suggests that vapor control at the lower portion of the basement wall is unnecessary. These locations experience temperatures that are similar to geographic locations that require no vapor control layer. The monitored data shows that an impermeable layer at this location reduces drying.