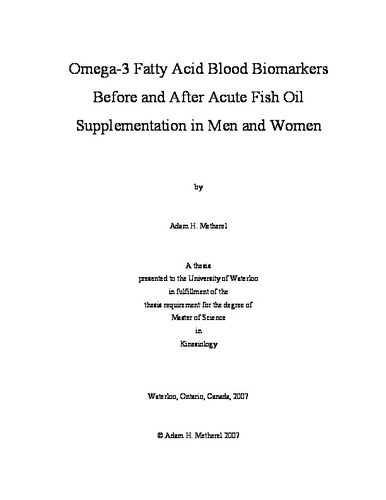 Omega-3 fatty acids, particularly docosahexaenoic (DHA) and eicospentaenoic acid (EPA), are important mediators for cardiovascular disease, fetal/infant development, neurological disorders and inflammatory diseases. Supplementation and washout studies are important for future research on the physiological effects of omega-3 fatty acids and for determination of the proper washout period for future cross-over studies. In this study, omega-3 fatty acid blood biomarker comparisons are made for the n-3 HUFA score (% of n-3 HUFAs in total HUFAs) and omega-3 index (sum of EPA + DHA) in plasma, erythrocytes, whole blood and a novel finger-tip prick blood method (FTPB) of analysis. This FTPB method of fatty acid analysis is further tested to determine the potential for its use in fatty acid analysis. In addition, gender differences in response to omega-3 fish oil supplementation are analyzed in all four blood fractions. Nine males and seven females were supplemented with 8 fish-oil capsules per day (providing 3.2 g/day EPA and 1.6 g/day DHA) for four weeks, followed by an eight-week omega-3 washout period. Venous plasma, erythrocyte and whole blood samples were collected during weeks 0, 4, 8 and 12 and FTPB samples were collected weekly during supplementation and washout fatty acid analysis was performed. EPA and DHA incorporation is lowest in magnitude in erythrocytes relative to all other blood fractions. Omega-3 blood biomarker comparisons demonstrate that the n-3 HUFA score is a more reliable measure across all blood fractions compared to the omega-3 index. In addition, the n-3 HUFA score demonstrates no differences (p > 0.05) between FTPB and whole blood analysis, providing evidence to support its usefulness as a tool for fatty acid analysis. However, differences (p < 0.05) do exist between these methods for saturated fatty acid, monounsaturated fatty acids, omega-6 polyunsaturated fatty acids (PUFAs) and omega-3 PUFAs. Baseline fatty acid levels for DHA, and the DHA:EPA and DHA:DPA ratios tend to be higher (p < 0.05) in females, and docosapentaenoic acid n-3 (DPAn-3) is higher (p > 0.05) in males across all blood fractions. Furthermore, a gender effect (p < 0.05) is seen for the DHA:EPA ratio across all blood fractions. At baseline, female DHA:EPA is higher (p < 0.05) than males with supplementation lowering both male and female values and removing any differences (p > 0.05) between genders. Washout results in a return of levels towards baseline, however, baseline levels are not fully reached. Furthermore, while gender differences do begin to reform during washout, these differences are not significant (p > 0.05). In conclusion, omega-3 fatty acid responses, particularly DHA:EPA ratio, demonstrate significant gender differences that may be related to differences in long-chain PUFA synthesis pathways between males and females. In addition, the n-3 HUFA score may be a more valuable omega-3 blood biomarker than the omega-3 index, as the n-3 HUFA score displays more consistent levels across all blood fractions. Finally, the FTPB method of analysis may be a useful tool in the measurement of fatty acid composition, however, some microwave methylation problems do exist, specifically in the phospholipid class of lipids.