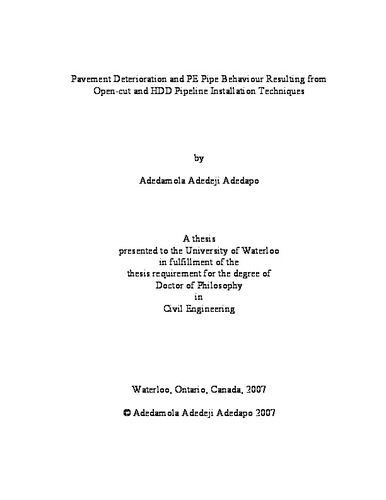 The damaging impact of continuous utility cuts on flexible pavement performance has been shown to be a major problem for urban roads and pavement mangers due to high reconstruction and maintenance costs. Horizontal Directional Drilling (HDD) is a trenchless construction method that does not require continuous trenching. HDD pipe installation techniques can reduce reinstatement costs, shorten construction periods, and lower social costs due to reduced user traffic delays. In this thesis, a detailed field study and numerical investigations was completed to quantify pavement deterioration and polyethylene (PE) pipe performance when pipelines are installed under flexible pavements using both traditional open-cut and HDD construction methods. Two 200mm SDR-17 DIPS HDPE pipes were installed 1.5m below a flexible pavement using open-cut and HDD construction technique. A state-of-the-art instrumentation and data acquisition systems were developed to measure HDD drill rig, PE pipes and pavement responses during pipe installations and for a period of about three years afterwards. Field data from (GPR) surveys, falling weight deflectometer (FWD) tests, surface distress surveys, and ground surface elevation survey were used to evaluate pavement deterioration due to the pipeline installations. The mechanisms of ground deformations during HDD and open-cut pipe installation were numerically investigated with FLAC3D, a commercial finite difference program. A hybrid constitutive model consisting of the traditional Duncan-Chang hyperbolic model and Mohr-Coulomb perfectly plastic model was developed and implemented in FLAC3D to simulate the non-linear stress-strain and stress dependent behavior of granular materials. Field test results show that the HDD installed pipe have significantly lower construction induced strains and ring deflections when compared to the open cut-and-cover installation and the mechanism of pipe deformation differs for the two construction techniques. The two pipes performed satisfactory over the long-term monitoring period as deflections and strain levels were below acceptable limits and there was no apparent deterioration of the pipe. Pipe deflections resulting from environmental effects (freeze and thaw) were found to be more significant than those due to material creep. Furthermore, the modified Iowa’s and Plastic Pipe Institute’s (PPI) ring deflection equations were found to over estimate pipe deflection for the open-cut and HDD installed pipes by about 114 and 50 percent, respectively. Results from field tests found that the HDD installation did not results in any observable change in the condition of the pavement structure performance, while the structure and integrity of pavement section in the vicinity of the open-cut was adversely impacted by utility cut excavation. It was determined numerically that when an unsupported excavation is created within a typical flexible pavement structure, distress zones that extend laterally from the face of the excavation to a distance of approximately 80% of the depth of excavation is developed. The results of the analyses suggests that better restoration techniques are required to eliminate the adverse effect caused by the stress relief within the pavement structure during a utility cut. Furthermore, the area of potential pavement deterioration should be extended beyond the edge of the utility cut to encompass the ‘distress zones’ when determining fees to cover pavement damage and restoration costs. Results obtained from numerical simulations advanced the understanding of the mechanism, magnitude, and extent of deformation within the pavement structure during HDD pipe installation in frictional and cohesive subgrade soils. Relationship between HDD annular bore pressures and displacements have been incorporated into design Charts and Tables for use in estimating maximum allowable bore pressures for HDD installation beneath flexible pavements. Critical bore pressures that would limit ground deformations and prevent excessive pavement deformations are presented. Critical bore pressures were compared to estimated allowable bore pressures obtained from the widely used Delft Geotechnics equation. The Delft Geotechnics equation was found to over estimate allowable bore pressure for HDD installation beneath flexible pavement. HDD pipeline installations under flexible pavement were found to have significantly lower restoration costs, social costs and maintenance cost than open-cut pipeline installations.