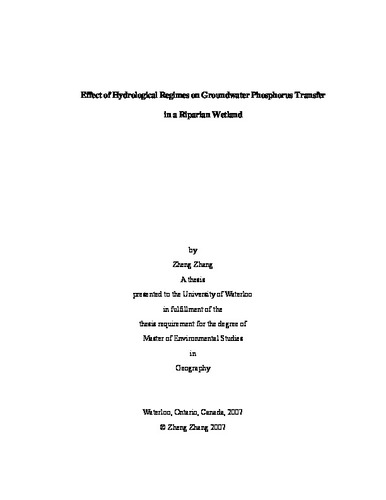 Riparian wetlands are important areas for regulating phosphorus (P) transfer in shallow groundwater. Limited knowledge is currently available regarding the effects of hydrological regimes on the transfer process of various P forms in shallow groundwater in upland-riparian-stream continuums in agricultural areas. This study focuses on P transfer in shallow groundwater within and between the riparian zone and hyporheic zone in Spencer Creek, and considers the effects on P transfer caused by flooding from the drawdown of the upstream Valens Reservoir, Hamilton, southern Ontario. A series of piezometer nests (each nest consisted of three piezometers at the depths of 50 cm, 100 cm and 150 cm) and corresponding wells were installed at the upland-riparian interface, riparian corridor and riparian-stream interface along two transects with different vegetation covers. Water chemistry was measured in groundwater and the stream from May 10 to October 20, 2006. The chemistry parameters included total phosphorus (TP), soluble reactive phosphorus (SRP), soil-extractable phosphorus, dissolved oxygen (DO), total dissolved solids (TDS) and pH. Water table elevation, hydraulic head and saturated hydraulic conductivity (Ksat) were measured at each location along the transects. Groundwater TP concentrations at the two transects ranged from 11.8 µg/L to 2685.6 µg/L with an average (mean ± standard error) of 365.2 ± 25.9 µg/L and from 12.7 µg/L to 8485.5 µg/L with an average of 742.4 ± 109.0 µg/L during baseflow and flood conditions, respectively. The groundwater SRP concentrations ranged from 3.6 µg/L to 417.9 µg/L with an average of 44.0 ± 3.8 µgL-1 and from 2.1 µg/L to 280.4 µg/L with an average of 33.9 ± 5.2 µg/L during baseflow and flood conditions, respectively. For both transects, mean TP and SRP concentrations in piezometers tended to increase with increasing distance from the field during both baseflow and flood. This trend was poorly correlated with depth. SRP concentrations in groundwater did not show the same decreasing trend by depth. The flood caused by the drawdown of upstream Valens Reservoir significantly increased TP concentrations (p=0.002) but significantly decreased SRP concentrations (p<0.001) in groundwater in the riparian zone. The TP concentrations at three depths were all significantly lower at transect T1 (predominantly grass cover) than T4 (predominantly forest cover) (50 cm: p=0.001; 100 cm: p<0.001; 150 cm: p<0.001). The SRP concentrations at 50 cm were significantly lower at transect T1 than T4 (p=0.003). The results of this study suggested that hydrology was a dominant factor regulating groundwater P transfer within the upland-riparian-stream continuum while other factors such as vegetation type and substrate characteristics were less important. The effectiveness of riparian zones to reduce P transport in groundwater from agricultural fields to adjacent streams will depend highly on site-specific hydrological regimes.