Effects of Age and Experience on Memory-Guided Movements 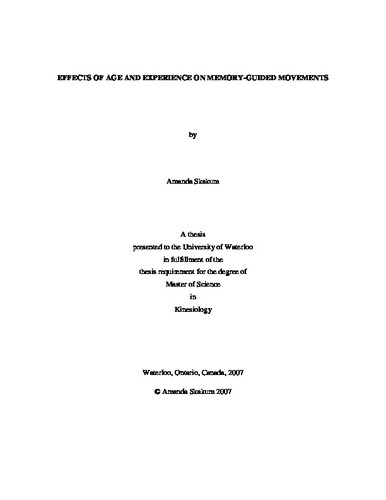 The purpose of the present research was threefold: 1) to investigate whether natural aging affects the movements to remembered targets when participants make reaching movements under closed-loop feedback conditions, 2) to determine if experience with visually-guided movements facilitates memory-guided reaching and 3) to determine if age affects this facilitation. Two groups of 10 participants (healthy older and healthy younger) performed a manual aiming task with a mouse on a graphics tablet. A target appeared in one of 6 possible locations on a computer screen and participants had to make aiming movements with a visible cursor in 3 different visual conditions: full vision, immediate recall and delayed recall. In the full vision condition vision of the target was available throughout the movement. In the delay conditions the target disappeared either at the initiation of the aiming movement (immediate recall) or 2 seconds before movement onset (delayed recall). Vision of the hand (cursor) was available in all conditions. Each memory condition was divided into 2 blocks; block 1 was presented before the full vision condition and block 2 was presented after. Endpoint accuracy and variability were measured along with movement kinematics. Results showed no age differences in the kinematics in the full vision condition. For memory dependent pointing age also did not affect the movement kinematics or endpoint accuracy. Movements to remembered targets were significantly more variable in the delay recall compared to the immediate recall condition. A Block by Condition effect showed that the delay effect was present in the first block, but not in the second block, suggesting that variability did not increase with memory delay once participants had experience from full vision reaching. A Group by Condition effect showed the older adults were more variable than younger, although this difference was smaller in the delay condition due to the increase in variability as a function of delay seen in younger but not older adults. These findings suggest that aging does not affect how movements are controlled whether pointing to visible or remembered targets. They also suggest that aging does not affect the accuracy in pointing to remembered targets. Aging does affect the variability of these pointing movements. Finally, experience in pointing at targets with full vision modulates the increase in variability of pointing as a function of delay.