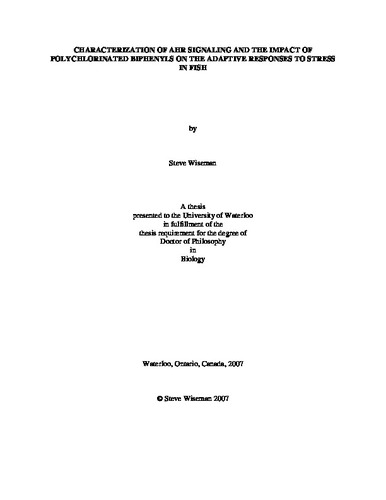 Persistent organic pollutants (POPs), including polychlorinated biphenyls (PCBs) are widespread in aquatic systems. These toxicants bioaccumulate in the tissues of aquatic organisms, especially fish as they occupy a position near the top of the aquatic food web. Teleost fish respond to stressors, including toxicants, by activating a co-ordinated network of adaptive responses, collectively termed the integrated stress response, which allows animals to regain homeostasis. Depending on the nature of the stressor, this stress response may be a generalised endocrine response that occurs at the organismal level and/or a cellular response involving protein synthesis. The cellular response to PCB insult involves aryl hydrocarbon receptor (AhR) activation and the induction of biotransformation enzymes, including cytochrome P4501A (Cyp1A). However, little is known about the mode of action of PCBs in affecting the adaptive stress response in animals. The objective of this thesis was to investigate the role played by AhR in mediating PCB impact on the highly conserved physiological responses to secondary stressors in fish. The experimental approach involved whole animal exposure studies with PCBs both in a laboratory setting as well as using feral fish. Also, in vitro mechanistic studies with pharmacological agents [AhR agonist (β-naphthoflavone) and antagonist (resveratrol), Hsp90 inhibitor (geldanamycin), proteasomal inhibitor (MG-132) and transcription (Actinomycin D) and translational inhibitors (cycloheximide D)] were carried out to understand AhR regulation in primary cultures of rainbow trout (Oncorhynchus mykiss) hepatocytes. Also, a targeted trout cDNA microarray was developed as a tool to identify stress-responsive genes and signaling networks in fish. Short-term (3 day) exposure to PCBs, while inducing liver AhR and Cyp1A expression, did not modify the adaptive plasma cortisol response to an acute handling disturbance in rainbow trout. However, PCBs exposure did modify the metabolic response that is critical for recovery from an acute stressor in rainbow trout. To assess the impact of chronic PCB exposure on cellular stress response, two feral populations of Arctic char (Salvelinus alpinus) from Bjørnøya Island, Norway, were utilized. This is because the average PCB load in char liver from Lake Ellasjøen was approximately 25-fold higher than in individuals from Lake Øyangen, providing a natural setting to compare long-term toxicant impact on stress proteins. Liver Cyp1A expression was elevated in the high PCB fish suggesting AhR activation. Changes in mRNA abundance and/or protein expression of glucocorticoid receptor (GR), heat shock protein 70 (Hsp70) and heat shock protein 90 (Hsp90) in fish from the high PCB lake leads to the proposal that chronic exposures to PCBs is proteotoxic to the fish. In vitro mechanistic studies with trout hepatocytes revealed for the first time that AhR is autoregulated in response to ligand activation in rainbow trout. Furthermore this AhR regulation as well as AhR signaling involves both the molecular chaperone Hsp90 and the proteasome in hepatocytes. AhR signaling appears to play a role in the cellular response to heat shock in trout hepatocytes. Specifically, AhR signaling appears to be involved in the heat shock-induced Hsp70 and Hsp90 protein expression in trout hepatocytes. This modulation of Hsps by AhR may involve the proteasome. Overall, the results point to a cross-talk between the AhR and Hsps signaling pathways, while the precise mechanism(s) remains to be elucidated. A targeted rainbow trout cDNA microarray was constructed as a tool to identify stress-responsive genes in trout. This custom cDNA array consisted of 147 rainbow trout genes designed from conserved regions of fish sequences available in GenBank. The targeted genes had established roles in physiological processes, including stress and immune function, growth and metabolism, ion and osmoregulation and reproduction. This targeted array revealed changes in gene expression suggesting a rapid liver molecular reprogramming as critical for the metabolic adjustments to an acute stressor in fish. Also, transcripts not previously implicated in the stress response process in fish, including genes involved in immune function and protein degradative pathways, were found to be stress-responsive. Many of these transiently elevated stress-responsive transcripts were also shown previously to be glucocorticoid-responsive in fish implicating a key role for genomic cortisol signaling in stress adaptation. Overall, this thesis demonstrates that PCBs impact the organismal and cellular stress response in fish. AhR autoregulation may be a key aspect of PCBs impact on the cellular stress response pathways. Hsp90 and the proteasome may be involved in AhR regulation and PCB-mediated signaling in fish. The results suggest a cross-talk between AhR and Hsp signaling pathways in fish. Finally, the targeted cDNA microarray will be a useful tool to further expand our knowledge on PCBs impact on the cellular stress signaling pathways in fish.

Steve Wiseman (2007). CHARACTERIZATION OF AHR SIGNALING AND THE IMPACT OF POLYCHLORINATED BIPHENYLS ON THE ADAPTIVE RESPONSES TO STRESS IN FISH. UWSpace. http://hdl.handle.net/10012/3234