Investigating the Application of Opposition-Based Ideas to Ant Algorithms 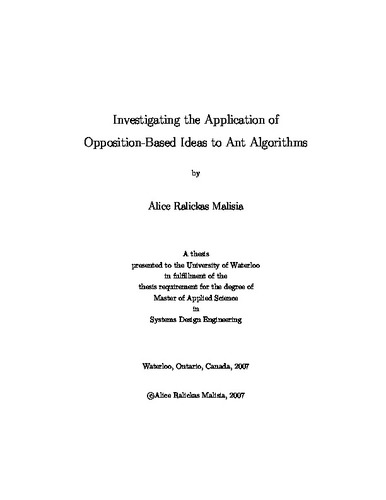 Opposition-based learning (OBL) was recently proposed to extend di erent machine learning algorithms. The main idea of OBL is to consider opposite estimates, actions or states as an attempt to increase the coverage of the solution space and to reduce exploration time. OBL has already been applied to reinforcement learning, neural networks and genetic algorithms. This thesis explores the application of OBL to ant algorithms. Ant algorithms are based on the trail laying and following behaviour of ants. They have been successfully applied to many complex optimization problems. However, like any other technique, they can benefit from performance improvements. Thus, this work was motivated by the idea of developing more complex pheromone and path selection behaviour for the algorithm using the concept of opposition. This work proposes opposition-based extensions to the construction and update phases of the ant algorithm. The modifications that focus on the solution construction include three direct and two indirect methods. The three direct methods work by pairing the ants and synchronizing their path selection. The two other approaches modify the decisions of the ants by using opposite-pheromone content. The extension of the update phase lead to an approach that performs additional pheromone updates using opposite decisions. Experimental validation was done using two versions of the ant algorithm: the Ant System and the Ant Colony System. The di erent OBL extensions were applied to the Travelling Salesman Problem (TSP) and to the Grid World Problem (GWP). Results demonstrate that the concept of opposition is not easily applied to the ant algorithm. One pheromone-based method showed performance improvements that were statistically significant for the TSP. The quality of the solutions increased and more optimal solutions were found. The extension to the update phase showed some improvements for the TSP and led to accuracy improvements and a significant speed-up for the GWP. The other extensions showed no clear improvement. The proposed methods for applying opposition to the ant algorithm have potential, but more investigations are required before ant colony optimization can fully benefit from opposition. Most importantly, fundamental theoretical work with graphs, specifically, clearly defining opposite paths or opposite path components, is needed. Overall, the results indicate that OBL ideas can be beneficial for ant algorithms.