Risk Factors for Marijuana Use among Russian and Canadian Adolescents: a Comparative Analysis 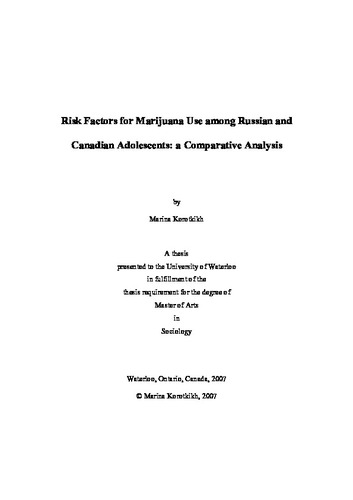 The increasing use of toxic substances is one of the most serious problems in today’s society. Recent tendencies such as widening of the variety of drugs available, intensity of drug circulation, and the decrease in age for first time users indicates that drug abuse is becoming one of the most alarming problems globally. Marijuana use remains the most widely used drug among the world population, and the number of cannabis users is increasing every year. The major focus of this research is on the young adolescents’ social environment and the risk factors for marijuana use that it produces. The influence of such elements of social environment as family, school, and peers is examined in this study. Evaluating the applicability of some theories, such as social control theory (Hirschi, 1969) and peer cluster theory (Oetting and Beauvais, 1986), to marijuana use of Russian and Canadian samples of adolescents between the ages of 14-16, this research employs the risk-focused approach. This approach requires the identification of risk factors for marijuana use for its prevention. The study involves making a comparative analysis of risk factors for marijuana use produced by social environment of the Canadian and Russian adolescents. The analysis is based on the data obtained within a World Health Organization Cross-National Study “Health Behaviour in School-Aged Children” in 2001/02. The method of logistic regression modeling is applied in order to examine which aspects of social environment of adolescents produce greater risks for marijuana use. The results shows that in spite of the differences between countries, peers have the strongest influence on adolescent marijuana use, which supports peer cluster theory. In addition, the study shows that young people’s own use of licit drugs, such as alcohol and tobacco, significantly increase risks of getting involved in marijuana use, which supports the major gateway hypothesis. Although these variables are not in the major research interest, they have strong predictive power, which can be discussed and examined in detail in future research.