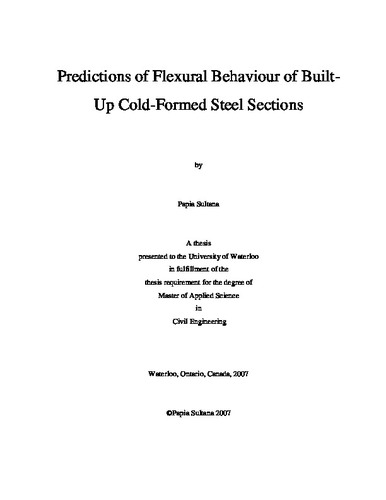 In recent years, light gauge cold-formed steel members have been used extensively in low and mid- rise residential building construction. In cold-formed steel design there are several applications where built-up box girders are used to resist load induced in a structure when a single section is not sufficient to carry the design load. The cold-formed steel box girders may be subjected to eccentric loading when the web of one of the sections receives the load and transfers it through the connection to another section. There may be an unequal distribution of load in built-up girder assemblies loaded from one side. In the current North American Specification for the Design of Cold-Formed Steel Structural Members (CSA-S136-01, 2001), there is no guideline or design equation to calculate the flexural capacity of this type of section. AISI cold-formed steel framing design guide (2002) has recommended that the moment of resistance and inertia of the built-up section are the simple addition of the component parts, based on deflection compatibility of the two sections. However, this design approximation has not been justified by any experimental or numerical study. Very little information was found in literature about this topic. The objective of this study is the investigation of the flexural behaviour of built-up box girders assembled from cold-formed stud and track sections when subjected to eccentric loading. Finite element analysis is conducted for this purpose, being much more economical than expensive experimental testing. Detailed parametric studies are carried out to identify the factors affecting the flexural capacity of built-up cold-formed steel sections. The parametric results are used to develop a design equation for calculating the flexural capacity of built-up cold-formed steel sections.