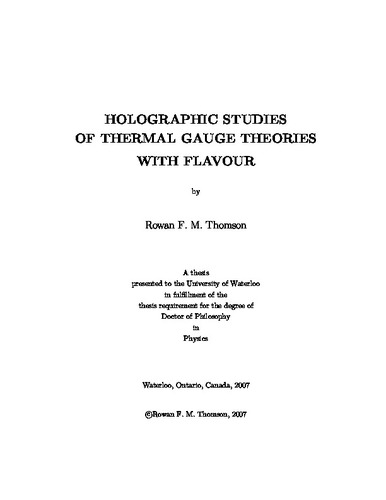 The AdS/CFT correspondence and its extensions to more general gauge/gravity dualities have provided a powerful framework for the study of strongly coupled gauge theories. This thesis explores properties of a large class of thermal strongly coupled gauge theories using the gravity dual. In order to bring the holographic framework closer to Quantum Chromodynamics (QCD), we study theories with matter in the fundamental representation. In particular, we focus on the holographic dual of SU(Nc) supersymmetric Yang-Mills theory coupled to Nf<<Nc flavours of fundamental matter at finite temperature, which is realised as Nf Dq-brane probes in the near horizon (black hole) geometry of Nc black Dp-branes. We explore many aspects of these Dp/Dq brane systems, often focussing on the D3/D7 brane system which is dual to a four dimensional gauge theory. We study the thermodynamics of the Dq-brane probes in the black hole geometry. At low temperature, the branes sit outside the black hole and the meson spectrum is discrete and possesses a mass gap. As the temperature increases, the branes approach a critical solution. Eventually, they fall into the horizon and a phase transition occurs. At large Nc and large 't Hooft coupling, we show that this phase transition is always first order. We calculate the free energy, entropy and energy densities, as well as the speed of sound in these systems. We compute the meson spectrum for brane embeddings outside the horizon and find that tachyonic modes appear where this phase is expected to be unstable from thermodynamic considerations. We study the system at non-zero baryon density nb and find that there is a line of phase transitions for small nb, terminating at a critical point with finite nb. We demonstrate that, to leading order in Nf/Nc, the viscosity to entropy density ratio in these theories saturates the conjectured universal bound. Finally, we compute spectral functions and diffusion constants for fundamental matter in the high temperature phase of the D3/D7 theory.