Investigation of Flavoproteins Involved in the Metabolism of Anaerobic Hyperthermophilic Microorganisms 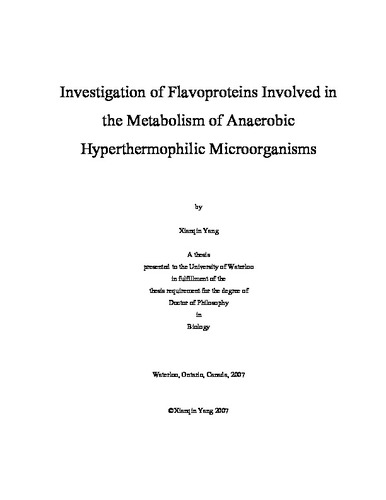 It was estimated that more than one hundred open reading frames in Pyrococcus furiosus and Thermotoga maritima could encode flavoproteins based on the results of motif search and comparison of genomic annotation to the experimentally characterized flavoproteins. However, only a few flavoproteins have been characterized from those anaerobic hyperthermophiles. It was found T. maritima and Thermotoga hypogea were able to grow in the presence of micromolar level of oxygen. As part of an oxygen removal system, the presence of NADH oxidase was detected in both microorganisms. In T. hypogea, NADH oxidase activity was constant regardless of the presence of oxygen, while in T. maritima it was increased in the presence of oxygen. The purified T. hypogea NADH oxidase was a flavin adenine dinucleotide (FAD)-containing homodimer with subunit molecular mass of 50 kDa. In addition to NADH oxidase activity, it also demonstrated activity of dihydrolipoamide dehydrogenase (DLDH), which is probably involved in glycine decarboxylation. The purified NADH oxidase from T. maritima was a heterodimeric protein of two subunits with molecular weight of 54 and 46 kDa, which were identified to be encoded by TM1432 and TM1433, respectively. Each subunit bore one FAD and the large subunit had one bacterioferritin-associated ferredoxin (BFD)-like [2Fe-2S]-center. Although the T. maritima NADH oxidase had very unusual oxygen sensitivity, the oxygen inactivated enzyme could be fully recovered by incubating with reducing reagents anaerobically. The NADH oxidases from both T. hypogea and T. maritima catalyzed the reduction of oxygen only to hydrogen peroxide. NADH-dependent peroxidase activities were detected in both T. maritima and T. hypogea, suggesting the presence of a multi-component oxygen detoxification system in Thermotoga species. In addition to its NADH oxidase activity, the enzyme from T. maritima exhibited FAD-linked glycerol-3-phosphate dehydrogenase (FAD-GPDH) activity. Along with the glycerol kinase, the FAD-GPDH took part in glycerol utilization in T. maritima. Ferredoxin NAD+ oxidoreductase (FNOR) activity was detected in T. maritima using an NADH:benzyl viologen oxidoreductase (BVOR) assay. The purified enzyme was a homodimeric FAD-containing protein with subunit molecular mass of 37 kDa. The purified enzyme was very active in catalyzing the reduction of BV and methyl viologen (MV) using either NADH or NADPH as electron donor and could indeed catalyze the reduction of NAD+ with the reduced ferredoxin from T. maritima. The purified enzyme was further identified to be encoded by TM0869 and annotated as thioredoxin reductase (TrxR). T. maritima TrxR could not use commercially available thioredoxin (Trx) from Spirulina, but the Trx purified from T. maritima. T. maritima Trx was identified to be encoded by TM0868 and annotated as glutaredoxin (Grx)-like protein, which showed both thioredoxin (Trx) and Grx activity. The purified T. maritima TrxR could catalyze the Trx-dependent reduction of both insulin and DTNB using NAD(P)H as electron donor. The identified Trx-TrxR system in T. maritima is the first one characterized in hyperthermophilic bacteria. T. hypogea has great potential in microbial hydrogen production. The key enzyme involved in this process, hydrogenase, has not been studied yet. The growth-dependent hydrogenase activity was detected in T. hypogea, from which a homotetrameric hydrogenase was purified. The purified T. hypogea hydrogenase did not contain any flavin prosthetic group as speculated, but [Fe-S]-centers. The hydrogenase could catalyze both BV and MV-dependent hydrogen oxidation and MV-dependent hydrogen evolution. Neither NAD(P)H nor NAD(P) could be used as electron carrier for this enzyme. T. hypogea hydrogenase could utilize ferredoxin as electron carrier for both production and oxidation of hydrogen, which suggests that the purified hydrogenase plays an important role in hydrogen metabolism of T. hypogea. It was concluded that flavoproteins can be involved at least in several very important cellular processes such as detoxification of oxygen, utilization of glycerol, redox regulation, and hydrogen metabolism in hyperthermophiles.