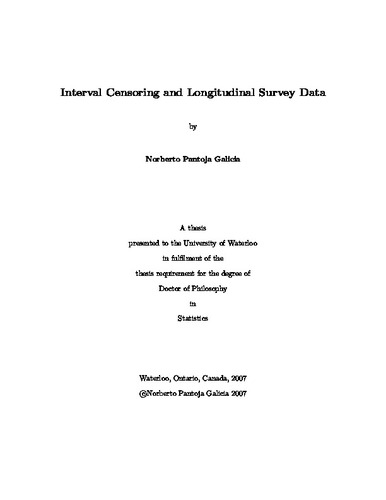 Being able to explore a relationship between two life events is of great interest to scientists from different disciplines. Some issues of particular concern are, for example, the connection between smoking cessation and pregnancy (Thompson and Pantoja-Galicia 2003), the interrelation between entry into marriage for individuals in a consensual union and first pregnancy (Blossfeld and Mills 2003), and the association between job loss and divorce (Charles and Stephens 2004, Huang 2003 and Yeung and Hofferth 1998). Establishing causation in observational studies is seldom possible. Nevertheless, if one of two events tends to precede the other closely in time, a causal interpretation of an association between these events can be more plausible. The role of longitudinal surveys is crucial, then, since they allow sequences of events for individuals to be observed. Thompson and Pantoja-Galicia (2003) discuss in this context several notions of temporal association and ordering, and propose an approach to investigate a possible relationship between two lifetime events. In longitudinal surveys individuals might be asked questions of particular interest about two specific lifetime events. Therefore the joint distribution might be advantageous for answering questions of particular importance. In follow-up studies, however, it is possible that interval censored data may arise due to several reasons. For example, actual dates of events might not have been recorded, or are missing, for a subset of (or all) the sampled population, and can be established only to within specified intervals. Along with the notions of temporal association and ordering, Thompson and Pantoja-Galicia (2003) also discuss the concept of one type of event "triggering" another. In addition they outline the construction of tests for these temporal relationships. The aim of this thesis is to implement some of these notions using interval censored data from longitudinal complex surveys. Therefore, we present some proposed tools that may be used for this purpose. This dissertation is divided in five chapters, the first chapter presents a notion of a temporal relationship along with a formal nonparametric test. The mechanisms of right censoring, interval censoring and left truncation are also overviewed. Issues on complex surveys designs are discussed at the end of this chapter. For the remaining chapters of the thesis, we note that the corresponding formal nonparametric test requires estimation of a joint density, therefore in the second chapter a nonparametric approach for bivariate density estimation with interval censored survey data is provided. The third chapter is devoted to model shorter term triggering using complex survey bivariate data. The semiparametric models in Chapter 3 consider both noncensoring and interval censoring situations. The fourth chapter presents some applications using data from the National Population Health Survey and the Survey of Labour and Income Dynamics from Statistics Canada. An overall discussion is included in the fifth chapter and topics for future research are also addressed in this last chapter.