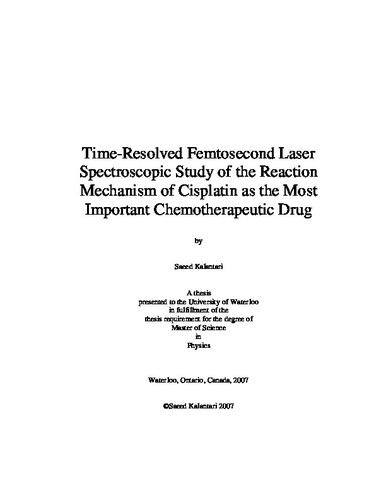 Being currently the second and potentially becoming the first cause of death in North America, cancer has been the focus of researchers from various areas of science. Chemotherapy is one of the leading treatment options for treating various types of cancer, particularly advanced cancers. Among different chemotherapeutic drugs currently used against cancer, cisplatin (CDDP) is considered as one of the most effective and widely used. Despite being the most successful drug in cancer chemotherapy, cisplatin has some shortcomings that restrict it from being more widely used. More than three decades of intensive research has not yet clearly explained why these shortcomings are associated with cisplatin treatment. Using the advanced “Pump-Probe Femtosecond Time-Resolved Transient Absorption Laser Spectroscopy” technique to study the reaction dynamics of cisplatin at the molecular level, we discovered new findings that make a profound contribution to our understanding of the mechanism of activity of CDDP as a very widely used and effective anticancer drug. By observing the reaction dynamics of cisplatin both in its reaction with electrons in water, and with all four DNA bases, in real time, we shed new light on the issues that have long been elusive for the last three decades. In addition to these two main research goals, we utilized the same methodology to examine the reaction dynamics of transplatin, which currently is not a clinically effective drug, despite being an isomer of cisplatin. In this part we mainly focused on examining the molecular reaction dynamics of transplatin photoactivation caused by UV irradiation. Here, we studied the transplatin reaction with electrons in water as well as with four DNA bases. Results obtained in this thesis work clearly reveal the mechanism underlying the cytotoxicity enhancement of this molecule after it is irradiated by UV radiation. The data obtained by our experiments provide a mechanistic understanding of this cytotoxicity enhancement at the molecular level. As the last goal in our research, we compared the explored reaction dynamics of cisplatin with its clinically ineffective trans isomer, transplatin. We believe that our understanding of one of these isomers, would also contribute to understanding of the other. The methodology we used to examine transplatin was the same as what we used for cisplatin. First, we monitored the possible reactions of transplatin with prehydrated electrons in water. After this, the dynamics of transplatin’s reactions with DNA bases were examined. For the first time, we directly observed the reactions of cisplatin and discovered that its extremely high reactivity with prehydrated electrons happens in an ultrafast process. We also showed the order of reactivity of all four DNA bases with cisplatin and transplatin to be G > A > C > T. Finally, in comparing cis and trans isomers of DDP, we discovered cisplatin to be about 50% more reactive, suggesting why it is much more cytotoxic. In all of these investigations we obtained promising results that revolutionize our understanding of the mechanism of action of cisplatin as a very important drug in current cancer chemotherapy.