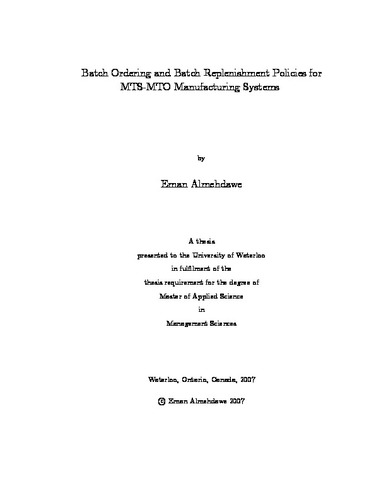 Hybrid Make-To-Stock (MTS)-Make-To-Order (MTO) manufacturing is a well known policy that captures the benefits of both MTS and MTO policies. This manufacturing policy is adopted by many manufacturing firms because it allows for production based on customer specifications while keeping short response times. We study a hybrid MTS-MTO manufacturing system which consists of two processing stages and an intermediate buffer between these two stages. We propose two separate scenarios for ordering and replenishment of components from the first stage which will give more realistic guidance for practitioners. The first scenario is batching customer orders before being released to the first stage. The second scenario is batch replenishment of common components from the first stage. Most existing MTS-MTO models focus on one-for-one ordering and replenishment strategies. We enhance these models by introducing a batch ordering policy to account for economies of scale in ordering when there is an ordering cost associated with each order placed for common components. We use queueing theory to model the system behavior and use the matrix-geometric method to evaluate system performance under the new ordering policy. Afterwards, we develop an optimization model with the objective to minimize the system overall costs. The purpose of our optimization model is to find the optimal intermediate buffer size and the optimal order quantity for the system. In the second scenario, we introduce the batch replenishment policy from stage 1. This policy is suitable when stage 1 and stage 2 are physically distant and there is a shipping cost incurred when components are transferred from stage 1 to stage 2. The decision variables in this model are the intermediate buffer size and the shipping quantity. We show that the base stock policy is sub-optimal when there is an ordering cost incurred for ordering components. The savings from adopting the batch ordering policy are high and the response time for most customer orders is not affected. When there are shipping costs and shipping time between the two stages, we show that the right selection of the system decision variables can have a large impact on the total cost incurred by the system.