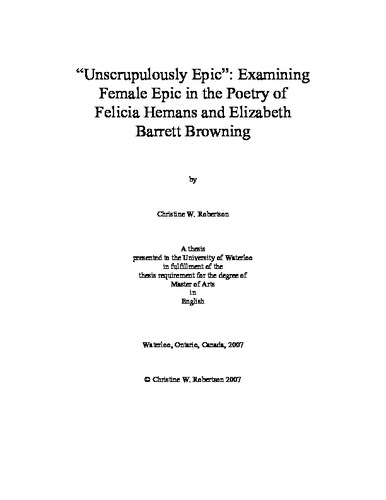 Virginia Woolf once remarked that, “[t]here is no reason to think that the form of the epic ... suit[s] a woman any more than the [masculine] sentence” (Woolf 84). This thesis represents an attempt to explore what the epic genre, as imagined and written by women, might look like in regards to the verse of fellow women poets Felicia Hemans and Elizabeth Barrett Browning. Despite the persistent critical misconception that women’s poetry of the Romantic and Victorian periods is comprised mainly of light, lyric verse and tends to lack that “great effort” – for example, the epic poem – which often appears in the work of their male contemporaries, this thesis will argue conversely that Hemans and Barrett Browning do assume certain aspects of traditional epic poetry – a genre “almost coterminous” with masculinity (Schweizer 1) – in their work, while also managing to transform the genre in order that their work might successfully embody a more feminine perspective. The first chapter of the thesis examines the ways in which these two women poets are able to bridge the private and public spheres by transforming the quintessential role of the female poet as record-keeper into that of the poet as prophet and visionary in their political poetry. The two following chapters will highlight the ways in which both Hemans and Barrett Browning remodel the epic form in order to draw attention to the female voice (chapter two) and to examine new and unconventional prototypes of female heroinism, for example the pioneering female artist and the militant mother (chapter three). With strong ties to a masculine tradition of epic, yet incorporating aspects of femininity hitherto foreign – perhaps even inimical – to the traditional conception of the genre, female epic, while admittedly something of a hybrid, arguably represents a distinctive genre in its own right and one which certainly merits more critical attention in the future.