Space and Particles at the Planck Scale 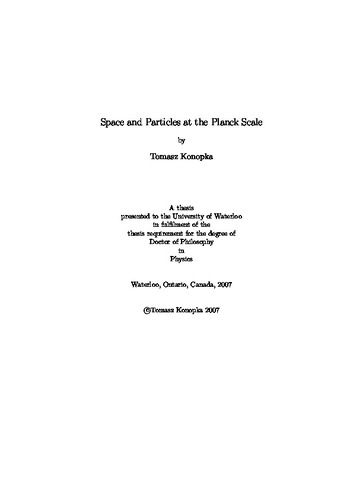 The aim of this thesis is to summarize some results in two approaches to studying how quantum gravity may be relevant for experiments. The first approach starts off by stating that one of the questions a theory of quantum gravity might address is how a large-scale universe can be constructed from discrete Planck-size elements. Starting from a discussion of the role of causal and foliation structure in causal dynamical triangulations, this approach leads to a formulation of a model based on graphs whose purpose is to uncover what kind organizational principle or structure might be responsible for endowing spacetime with manifold-like properties. Thus in this approach, experimental input used to constrain models for quantum gravity are observations of glaring large-scale properties of the universe such as the dimensionality or total size. The second approach considers the possible effects of quantum gravity on the propagation of particles. In particular, the focus is on understanding the physics of deformed special relativity when this novel symmetry is seen as a residual effect due to a gauge fixing from a higher dimensional system. Thus here the hope is to connect a proposal for quantum gravity phenomenology with precision experiments of particle properties. A synthesis of such complementary approaches would represent a consistent model for quantum gravity phenomenology and is the background goal for the work in this thesis. The extent to which such a synthesis can be described today is presented.