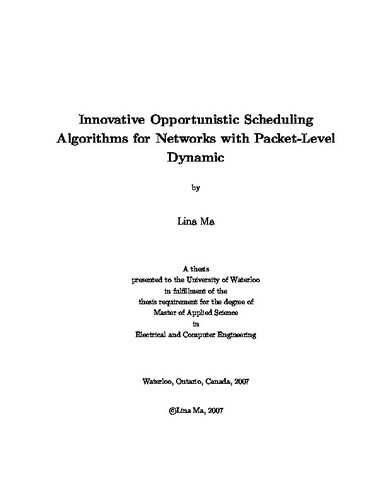 Scheduling in wireless networks plays an important role. The undeterministic nature of the wireless channel is usually considered as an undesirable property. Recently, the idea of opportunistic scheduling is introduced and it takes advantage of the time-varying channel for performance improvement such as throughput and delay. Since the introduction of opportunistic scheduling, there are two main bodies of works. The first body of works assume that each user is greedy and has infinite backlog for transfer. With this assumption, fairness objective becomes an important factor in designing a scheduling algorithm to avoid severe starvation of certain users. Typical fairness involve processor sharing time fairness, proportional fairness, and minimum performance guarantee. On the other hand, delay performance is not a appropriate factor to evaluate the effectiveness of a scheduling algorithm because of the infinite backlog assumption. In reality, this assumption is not true as data arrives and leaves the network randomly in practice. The second body of works deal with the relaxation of the infinite backlog assumption. Thus, the notion of stability region arises. The definition of stability is that the queue at each source node remains finite. Stability region can be defined as the set of traffic intensities which can all be stabilized by the network. The well known throughput optimal algorithm is proven capable of achieving the largest stability region. In this thesis, two innovative opportunistic scheduling algorithms which aim to minimize the amount of resources used to stabilize the current traffics are proposed. The key feature of our algorithm is that the incoming traffic rates are available to the scheduler, whereas the throughput optimal algorithm has no such prior traffic knowledge. Performance comparisons are made by means of simulation to demonstrate that the proposed algorithms can achieve the same stability region as the throughput optimal algorithm. Moreover, the delay performance is better than that of the throughput optimal algorithm, especially under heavy traffic conditions.