Emergence and Influence of Expertise in Group Decision Making: A Judgmental Task 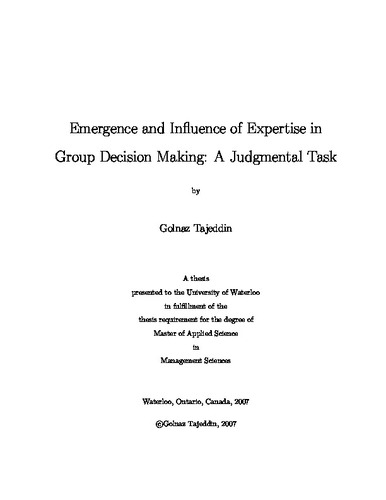 This thesis investigates the emergence and influence of expertise in group decision making while performing a judgmental task. Previous studies focused on intellective tasks or compared the group performance with the performance of the best individual in the group. In this study, performance feedbacks are provided to groups to help group members compare the individual performances and identify the expert. Laboratory experiments were conducted in which the task was to select a proverb that Canadians would like the most from the list of four proverbs from countries other than Canada. The four proverbs for each question were guaranteed to have equal selection probability based on the pretest survey. 18 four-person cooperative groups were asked to perform the task for eight iterations each. One member in each group was selected randomly to be the expert. Groups received performance feedbacks that reinforced the expert at the end of each iteration. The amount of information conveyed to each group regarding the expertise level of each group member was measured with a novel application of information analysis that captures the expert's gradual emergence. Experiment results supported the hypotheses of this study that (1) group members recognize the expert when working on a judgmental task with performance feedback and (2) while performing a judgmental task, the expert has more influence on the group decision making compared to others.