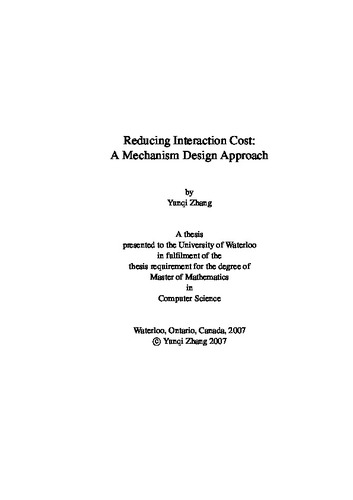 In this thesis we study the problem of requiring self-interested agents need to interact with some centralized mechanism where this interaction is costly. To improve their utility, agents may choose to interact with \emph{neighbours} in order to coordinate their actions, potentially resulting in savings with respect to total interaction costs for all involved. We highlight the issues that arise in such a setting for the mechanism as well as for the agents. We use a mechanism-design approach to study this problem and present a model for self-interested agents to form groups with neighbours in order to reduce the total interaction cost. Our model focuses on two aspects: reward-distribution and cost-sharing. We look at two scenarios for reward-distribution mechanisms and proposed a core-stable payoff as well as a fair payoff mechanism. We then propose a cost-sharing mechanism that agents can use to coordinate and reduce their interaction costs. We prove this mechanism to be incentive-compatible, cost-recovery and fair. We also discuss how agents might form groups in order to save on cost. We study how our final outcome (the total percentage of savings as a group) depends on the agents' interaction topology and analyze different topologies. In addition we carry out experiments which further validate our proposal.