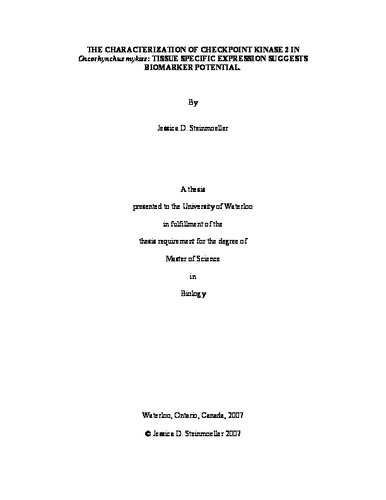 Chk2 is a cell cycle checkpoint kinase that is essential for initiating the DNA damage response in the presence of genetic damage. Its role is highly conserved from budding yeast (where it is named Rad53) to humans. Very few cell cycle checkpoint proteins have ever been studied in fish and the role of Chk2 has never been characterized. Oncorhynchus mykiss (Rainbow trout) was chosen for this project due to its importance in the commercial aquaculture industry and the availability of rainbow trout cell cultures at the University of Waterloo. This study was the first to clone the CHK2 gene in a teleost species, verified through both genomic and cDNA cloning. A section of the CHK2 gene, specifically the forkhead associated domain (FHA), was used to express recombinant Chk2 protein and generate polyclonal anti-Chk2 antibodies. A southern blot was performed and CHK2 was found to exist as a single copy number in the rainbow trout genome. The tissue specificity of Chk2 was also examined both at the mRNA transcript and protein level. Interesting tissue specific differences were discovered with transcript levels moderately low in gill and higher in brain, while protein levels were extremely high in gill and lower in brain tissues. Protein levels were verified in both whole fish tissue samples and in cell culture suggesting that cell cultures accurately reflect the state of checkpoint proteins in vivo. These tissue specific differences suggest that in gill, Chk2 is maintained at a high protein level to combat any toxins in the water attempting to transverse this barrier tissue and gain access to the fish’s circulatory system. Meanwhile, the blood brain barrier offers protection to the highly sensitive brain tissue, suggesting that high levels of Chk2 protein are not constitutively required, but instead remain in a transcript reservoir able to be quickly translated in the event of DNA damage. To determine whether Chk2’s checkpoint role is conserved in O. mykiss, both gill and brain cell cultures were treated with low and high doses of bleocin (a commercially available form of bleomycin) known to cause high levels of double-strand breaks, the most deleterious type of DNA damage and a specific activator of the Chk2 DNA damage response (DSB). Results showed that bleocin had no effect on levels of Chk2 in gill cells, confirming that the protein is constitutively active in this tissue always on alert against potential genetic insult. In contrast, brain cells were able to upregulate Chk2 in a dose-dependent manner to bleocin induced DNA damage demonstrating that Chk2 can act as a biomarker for genetic damage in brain cells. In conclusion, the tissue specific expression of Chk2 and its ability to respond to DNA damage suggests that checkpoint proteins may serve as suitable biomarkers for DNA damage in O. mykiss and other fish species.