"The Writer Within Did it!" Metafiction and Ulf Miehe's Ich hab noch einen Toten in Berlin 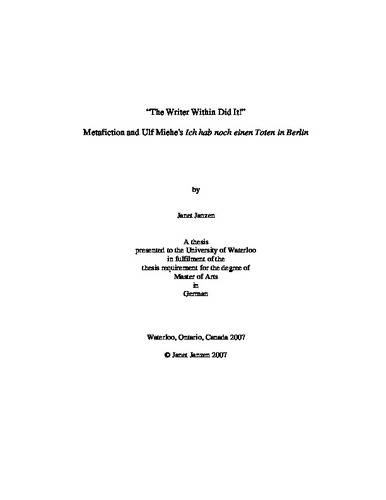 As one of the first scholarly studies of Ulf Miehe’s Ich hab noch einen Toten in Berlin, this thesis undertakes a close reading of the novel, thereby providing a basis for further research. According to Linda Hutcheon's typology of metafiction as outlined in her book titled Narcisstic Narrative Miehe's novel displays the characteristics that fall under her category of overt metafiction, as opposed to covert metafiction. Overt metafiction self-consciously thematizes narrative, stating outright that a parallel theme to the narrative is the discussion of the narrative. Following mainly Hutcheon's defining characteristics of overt metafiction, I have separated my narrative analysis of Miehe's novel into three sections: pastiche, intertextuality, and narrative layering. The first two sections are concerned namely with how the novel engages with the discourses of the hard-boiled genre and the theoretical and social considerations of the artist, while the last section explores how the form and content expresses this self-conscious disruption of the narrative. The argument unfolds by first discussing Fredric Jameson's concept of pastiche in place of Linda Hutcheon's parody, as indicative of a shift from modernism to post-modernism. Benjamin's narrative (the main character) as a performance projects his pastiche of the hard-boiled genre onto Berlin, recording the gap between the world he experiences and the image he projects onto the world, indicating that it is to be read as imitation. Benjamin documents the inauthenticity of the hard-boiled genre's realism through his projection and indicates the possibility of many versions through Anna's countering version. In the second section, intertextuality is discussed through Hutcheon's link to T. S. Eliot's concept of tradition in literature. Miehe's intertextual references engage with the artistic, theoretical and social considerations of the tradition, including realism of the hard-boiled genre, influence anxiety, originality, inspiration, and race relations. When Miehe includes references to the hard-boiled genre in literature and film, and to himself, his novel questions the necessity and accuracy of the hard-boiled genre's claim to realism, but also expresses part of that questioning to be a comparison and search for inspiration for original work. This involves the recognition of the past texts as not the one and only authentic version or form, but that innovation requires a recreating of past texts. The last and third section concerns narrative layering as a means to thematize narrative within a narrative. Through the devices of mise en abyme, storytelling, narrative thematizing, and narrative framing, the text shows itself to be self-aware of its function as narrative, while creating that narrative. These devices attempt to engage the reader as an active participant as the text questions its own conceptualization of reality, the diegetic world, hopefully leading the reader to question the perception of reality presented in all texts. The occurrences of metafictional devices in Miehe's novel develop the text as what Patricia Waugh describes as the site of communication between the reader and the writer. The writer has dismantled the codes that would usually cause a passive reader. Instead, the reader is encouraged to recreate the narrative through disruptive clues. In this active role, detecting the authentic text becomes the investigation of the many texts.