"Depression Is A Medical Condition": Exploring the Medicalization of Depression on SSRI Websites 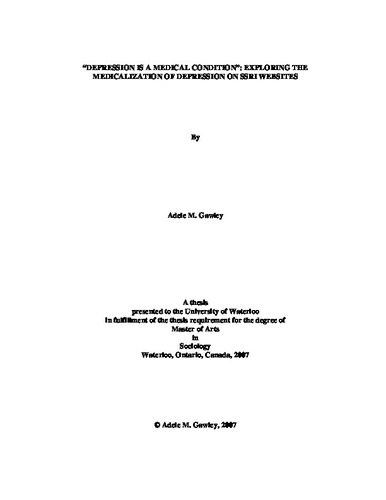 ABSTRACT “DEPRESSION IS A MEDICAL CONDITION”: EXPLORING THE MEDICALIZATION OF DEPRESSION ON SSRI WEBSITES Sociologists of medicine have become increasingly interested in mental health over the last two decades (Pilgrim and Rogers, 2005). Known as the “common cold” of mental illness, depression affects millions around the globe. The social understanding of depression has been shaped by a phenomenon known as medicalization, where an unusual behavior or state of being is labeled illness or disorder or disease, and addressed through rationalized medical intervention. The medicalization of depression is particularly evident on SSRI websites. SSRIs (Selective Serotonin Reuptake Inhibitors) are a popular class of antidepressants used to treat depression. Pharmaceutical companies who manufacture these medications now advertise their products on the Internet, an increasingly popular source for health information. This thesis is a critical, empirical investigation of the medicalization of depression on SSRI websites. Five major research questions guide this study. First, how is depression portrayed on the websites? Second, what are the means used to construct this portrayal? Third, who is the apparent target audience? Fourth, what assumptions are made about this audience? Finally, what is absent from or silent in the websites? These questions are answered using an analytical framework called Critical Discourse Analysis (CDA). This framework is both a theoretical orientation and a methodological process (Fairclough, 1992). This study reveals that medicalization has a strong impact on the portrayal of depression on the websites, and is the major perspective from which the issue is approached. The depressed person is seen to be affected by depression in a variety of ways, including being ill with a medical condition and at risk for further difficulty if treatment is not handled properly. A variety of means are used to construct the portrayal of depression, including structural means such as interactional controls, linguistic means such as word choices and meanings, and visual means such as the use of diagrams and caricatures. Embedded in the text are a number of indicators which highlight some apparent assumptions about the targeted audience, such as insurance coverage and general literacy. Absences or silences in the texts include a failure to discuss the prevention of depression. The most significant finding concerns “the symptom/side-effect” problem; this dilemma highlights the lack of clarity around definitions of recovery and mental health as well as the purpose of taking medications. It also reveals that, while the application of the medicalized perspective to depression is certainly useful given the efficacy of antidepressant drugs for many people, it is not infallible and requires careful critical consideration.