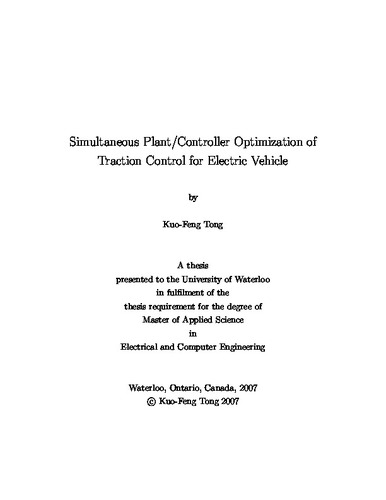 Development of electric vehicles is motivated by global concerns over the need for environmental protection. In addition to its zero-emission characteristics, an electric propulsion system enables high performance torque control that may be used to maximize vehicle performance obtained from energy-efficient, low rolling resistance tires typically associated with degraded road-holding ability. A simultaneous plant/controller optimization is performed on an electric vehicle traction control system with respect to conflicting energy use and performance objectives. Due to system nonlinearities, an iterative simulation-based optimization approach is proposed using a system model and a genetic algorithm (GA) to guide search space exploration. The system model consists of: a drive cycle with a constant driver torque request and a step change in coefficient of friction, a single-wheel longitudinal vehicle model, a tire model described using the Magic Formula and a constant rolling resistance, and an adhesion gradient fuzzy logic traction controller. Optimization is defined in terms of the all at once variable selection of: either a performance oriented or low rolling resistance tire, the shape of a fuzzy logic controller membership function, and a set of fuzzy logic controller rule base conclusions. A mixed encoding, multi-chromosomal GA is implemented to represent the variables, respectively, as a binary string, a real-valued number, and a novel rule base encoding based on the definition of a partially ordered set (poset) by delta inclusion. Simultaneous optimization results indicate that, under straight-line acceleration and unless energy concerns are completely neglected, low rolling resistance tires should be incorporated in a traction control system design since the energy saving benefits outweigh the associated degradation in road-holding ability. The results also indicate that the proposed novel encoding enables the efficient representation of a fix-sized fuzzy logic rule base within a GA.