Amenability for the Fourier Algebra 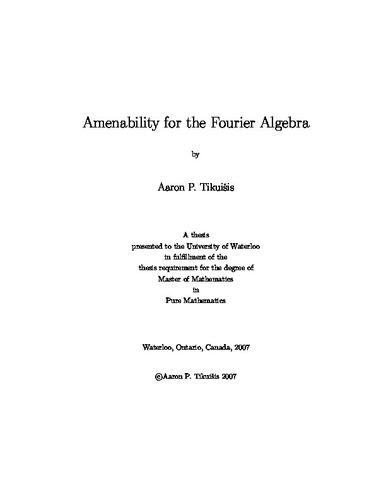 The Fourier algebra A(G) can be viewed as a dual object for the group G and, in turn, for the group algebra L1(G). It is a commutative Banach algebra constructed using the representation theory of the group, and from which the group G may be recovered as its spectrum. When G is abelian, A(G) coincides with L1(G^); for non-abelian groups, it is viewed as a generalization of this object. B. Johnson has shown that G is amenable as a group if and only if L1(G) is amenable as a Banach algebra. Hence, it is natural to expect that the cohomology of A(G) will reflect the amenability of G. The initial hypothesis to this effect is that G is amenable if and only if A(G) is amenable as a Banach algebra. Interestingly, it turns out that A(G) is amenable only when G has an abelian group of finite index, leaving a large class of amenable groups with non-amenable Fourier algebras. The dual of A(G) is a von Neumann algebra (denoted VN(G)); as such, A(G) inherits a natural operator space structure. With this operator space structure, A(G) is a completely contractive Banach algebra, which is the natural operator space analogue of a Banach algebra. By taking this additional structure into account, one recovers the intuition behind the first conjecture: Z.-J. Ruan showed that G is amenable if and only if A(G) is operator amenable. This thesis concerns both the non-amenability of the Fourier algebra in the category of Banach spaces and why Ruan's Theorem is actually the proper analogue of Johnson's Theorem for A(G). We will see that the operator space projective tensor product behaves well with respect to the Fourier algebra, while the Banach space projective tensor product generally does not. This is crucial to explaining why operator amenability is the right sort of amenability in this context, and more generally, why A(G) should be viewed as a completely contractive Banach algebra and not merely a Banach algebra.