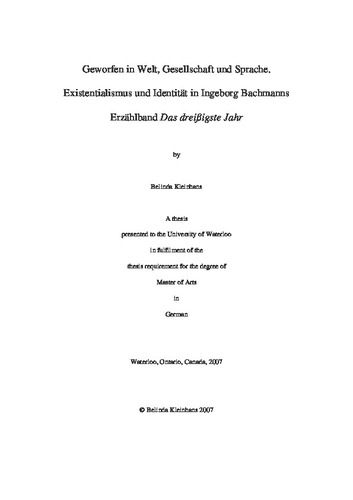 The following thesis deals with the problem of self-identity in Ingeborg Bachmann’s narrative cycle Das dreißigste Jahr (The Thirtieth Year) and discusses the terms and conditions of developing one’s own, authentic identity. Until now, this early cycle has been analysed with an emphasis on either gender studies or philosophical perspectives. These analyses mainly address the utopian concept of language or the boundary between that which can be said, and ‘the mystical’ beyond this border. To give the question of identity a new perspective, this thesis applies existentialist theories from the field of philosophy to the narratives and determines the connection between self-identity, world, society and language. Gender theories, as well as philosophical-mystical speculations, are mainly excluded in the search for a new answer to the old question: How is a person’s identity formed? The main questions that are addressed in the thesis include: Is it possible to be oneself and how? How can we create our own identity despite the image of ourselves presented to us by others? And are we capable of constructing our own identity with the language available to us? In the first part of the thesis, I will provide a theoretical foundation, the philosophical background that underpins my analysis. After clarifying the direction of my study, the questions it will address and describing the method I will use in my analysis, I include a definition section that gives clear explanations about the key concepts of identity and existentialism which pertain to my analysis. This is followed by a basic philosophical introduction that explains the main concepts used in this work, including: Being thrown into the world, the quest for self-identity, the relationship between the “self” and the “other” and the meaning of language. These concepts are taken from the existentialist philosophy of Heidegger and Sartre. The next section gives an overview of the research to date concerning the most important works on the topics of “identity” and “language” in Ingeborg Bachmann’s prose, with a focus on the cycle Das dreißigste Jahr and positions the thesis in the context of this current research. The main analysis of the primary work applies the philosophical theories to a close analysis of the narratives, focussing not just on single narratives, but on aspects of them all. After a short overview of the contents of each narrative it analyses these aspects under five main topics: The condition of the self as being “thrown into the world”; the relation between self and society; the problem of language; the attempt to break free from society and language; and finally the “reconciliation” between society and a person’s self-identity within the framework of world, language and society. The main emphasis in the results focuses on the alienating effect that society as well as language has on the self, and the struggle of the self to achieve an independent and authentic self-identity. This thesis goes beyond the existing research on the narratives by addressing aspects of the self within a given framework other than gender theories, role-specific arguments or philosophical-mystical explanations. Its analysis of the works from an existentialist point of view, i. e. Sartre and Heidegger, provides a new perspective on what are essentially philosophical texts.