Development and application of plant macrofossils for paleolimnological reconstructions in the Slave River Delta, N.W.T. 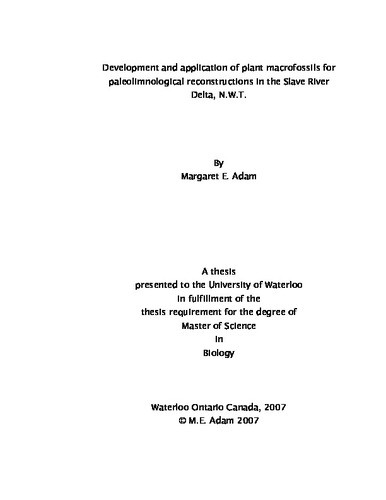 This thesis combines detailed analyses of living plant communities with paleolimnological methods to develop the use of plant macrofossils as an effective tool to track hydroecological changes in ponds of the Slave River Delta (SRD), N.W.T. Several approaches were used to develop an understanding of the relationships between hydrolimnological conditions, living plant communities, and the composition of sedimentary macrofossil remains across spatial and temporal scales. A spatial survey approach was used to assess the relationships between the composition of plant macrofossil assemblages contained in the surface sediments and the hydrological and limnological conditions of 40 SRD basins that span a broad range of hydrological settings in the delta. Results show that there are strong relationships between the prevailing hydrolimnological conditions in the SRD and the composition of sedimentary macrofossil remains, and subsequently indicator macrofossil taxa were identified to distinguish between sites with high river influence (flood-dominated sites: ostracode shells, Daphnia ephippia, Chara oospores; exchange-dominated sites: Myriophyllum winter-bud scales, Daphnia ephippia) and sites with low river influence (evaporation-dominated: Ceratophyllum leaves, Lemna leaves, Drepanocladus leaves). In light of the strong connection between spring flood events and the hydrolimnological conditions of SRD ponds, and growing concerns that the frequency of spring floods have declined in recent decades, paleolimnological investigations were initiated at a pond (SD2) adjacent to the Slave River to construct a record of flood events in the SRD. Prior to analysis of macrofossil assemblages from sediment cores, a detailed study of the living plant community was conducted at SD2, and results were compared to the distributions of surficial sedimentary plant macrofossil assemblages to assess how representative surficial sediment assemblages are of the living plant community. This study indicates distinct patch-scale (or quadrat-scale)similarity between the living vegetation and sedimentary remains in the central basin, as well as distinct similarity between the living aquatic macrophytes and sedimentary remains at a pond-scale, suggesting there is excellent potential to track changes in the composition and percent cover of aquatic macrophytes in pond sediment cores using plant macrofossil assemblages. Additionally, this study indicates that influence of long-distance transport of macrofossils during the 2005 flood event was minor at this pond, and may not be an important factor affecting paleolimnological reconstructions of plant communities. With contemporary studies as a framework, an ~90-year record of ice-jam flood frequency was reconstructed from a sediment core collected from pond SD2. Multi-proxy analyses indicated decadal-scale oscillations in flood frequency at this site, with at least three multi-year periods of low river influence. Beginning in ~1943, an 18-year period of particularly low river influence and greatly reduced water levels was indicated by abundant macrofossils of Sagittaria cuneata and represents the driest period over the past ~90-years. Similarities between the flood history of SD2 and upstream sites in the Peace-Athabasca Delta suggest that spring discharge generated from headwaters and major contributing rivers plays a key role in the frequency and magnitude of spring flood events of both deltas.