Signatures of New Physics from the Primordial Universe 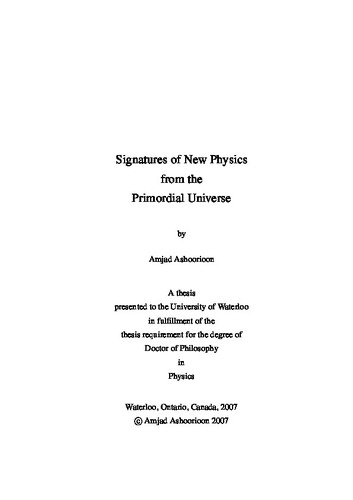 During inflation quantum fluctuations of the field driving inflation, known as inflaton, were stretched by inflationary expansion to galactic size scales or even larger. A possible implication of inflation -- if it is correct -- is that our observable universe was once of sub-Planckian size. Thus inflation could act as a magnifier to probe the short distance structure of space-time. General arguments about the quantum theory of gravity suggest that the short distance structure of space-time can be modeled as arising from some corrections to the well-known uncertainty relation between the position and momentum operators. Such modifications have been predicted by more fundamental theories such as string theory. This modified commutation relation has been implemented at the first quantized level to the theory of cosmological perturbations. In this thesis, we will show that the aforementioned scenario of implementing the minimal length to the action has an ambiguity: total time derivatives that in continuous space-time could be neglected and do not contribute to the equations of motion, cease to remain total time derivatives as we implement minimal length. Such an ambiguity opens up the possibility for trans-Planckian physics to leave an imprint on the ratio of tensor to scalar fluctuations. In near de-Sitter space, we obtain the explicit dependence of the tensor/scalar on the minimal length. Also the first consistency relation is examined in a power-law background, where it is found that despite the ambiguity that exists in choosing the action, Planck scale physics modifies the consistency relation considerably as it leads to large oscillations in the scalar spectral index in the observable range of scales. In the second part of the thesis, I demonstrate how the assumption of existence of invariant minimal length can assist us to explain the origin of cosmic magnetic fields. The third part of the thesis is dedicated to the study of signatures of M-theory Cascade inflation.