When and Where?: Time and Space in Boris Akunin's Azazel' and Turetskii gambit 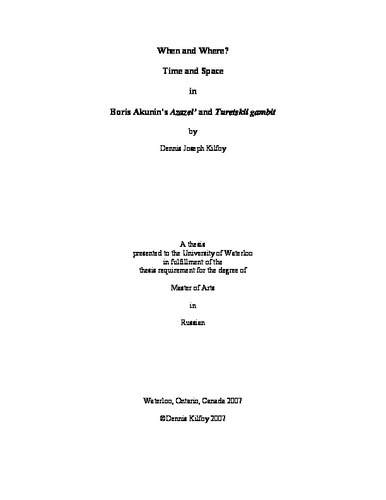 Boris Akunin’s historical detective novels have sold more than eight million copies in Russia, and have been translated into nearly a dozen languages. Boris Akunin is the pen name of literary critic and translator Grigory Chkhartishvili. Born in 1956 in the republic of Georgia, he published his first detective stories in 1998. His first series of novels, beginning with Azazel’ and followed by Turetskii gambit, feature a dashing young police inspector, Erast Fandorin. Fandorin’s adventures take place in the Russian Empire of the late nineteenth century, and he regularly finds himself at the center of key historic events. The first book takes place over one summer, May to September 1876, as the intrepid Fandorin, on his first case, unveils an international organization of conspirators—Azazel’—bent on changing the course of world events. The second takes place two years later from July 1877 to March 1878 during Russia’s war with the Ottoman Empire. The young detective again clashes with Azazel’, as he unravels a Turkish agent’s intricate plan to weaken and destroy the Russian state. Both adventures have proven wildly popular and entertaining, while maintaining a certain literary value. The exploration of time and space in Russian literature was once a popular subject of discourse, but since the 1970s it has been somewhat ignored, rarely applied to contemporary works, and even less to works of popular culture. Akunin’s treatment of time and space, however, especially given the historical setting of his works, is unique. Azazel’, for example, maintains a lightning pace with a tight chronology and a rapidly changing series of locales. Turetskii gambit presents a more laconic pace, and, though set in the vast Caucasus region, seems more claustrophobic as it methodically works towards its conclusion. Both works employ a seemingly impersonal narrator, who, nonetheless, speaks in a distinctly 19th century tone, and both works cast their adventures within the framework of actual historical events and locations. This thesis analyzes core theories in literary time and space, applying them then to Akunin’s historical detective literature.