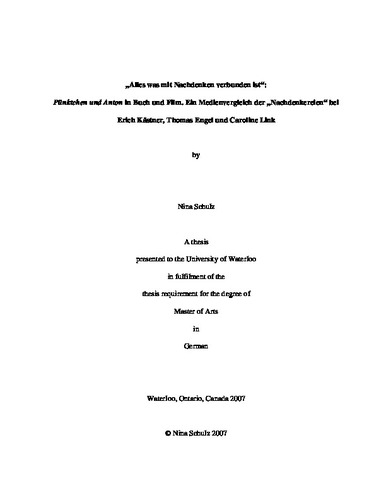 Erich Kästner’s novel for children, Pünktchen und Anton (1931), has been twice adapted for the screen, first in 1953 by Thomas Engel and then again in 1999 by Caroline Link. Both directors were also responsible for the screenplays which set the action in the present day. Kästner’s novel features 16 so-called “Nachdenkereien,” short passages following each chapter that outline moral principles, virtues, and values. This pedagogical content provides the readers with guidelines for the betterment of their own characters. After considering the genre of children’s literature as well as Erich Kästner’s reputation as an author of children’s books, the thesis focuses on the cinematic adaptation of these “Nachdenkereien.” Each version of Pünktchen und Anton is analyzed in turn with special attention paid to the representation of the moral lessons found in the “Nachdenkereien.” This analysis reveals that the film directors, being unable to reproduce cinematically the specific literary form of Kästner’s “Nachdenkereien,” transmit the content of these lessons by means of plot. Whereas Kästner uses a first-person narrator to explain the “Nachdenkereien” to young readers, the filmmakers introduce events that are not found in Kästner’s novel but which nevertheless convey the ethics present in the “Nachdenkereien.” Engel and Link therefore avoid the use of on- or off-screen narration in favour of incorporating the moral warnings into the plot. Other elements of the films, for example setting and characterization, aid in the transmittal of the story’s ethical messages. The movies leave it to their audiences to extract the moral guidelines contained in the stories, a departure from Kästner’s more direct entreaties to the readers. In either case, the readers/viewers of the stories are ultimately left with the final decision whether to heed the moral imperative presented.