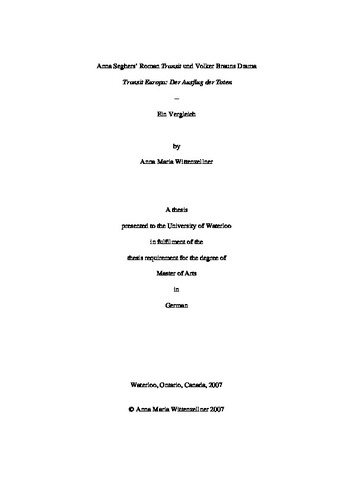 Abstract Anna Seghers’ novel Transit (1948) and Volker Braun’s play Transit Europa: Der Ausflug der Toten (1988) have not received as much attention as their other works. The topics transit and transition have not been taken into consideration sufficiently by previous research; some aspects of transit had been discussed, but not beyond a mostly superficial reflection. The intention of this comparative analysis is to deconstruct the implementation and impact of the complex topic of transit that we find in Transit and Transit Europa: Der Ausflug der Toten. Thus we gain a better understanding of the motivation that Seghers and Braun had to write the novel and the play respectively. Seghers’ novel not only preserves her own experience of exile and the desperate situation of emigrants during the Third Reich in general. She also writes in detail about the various aspects of the transition process, the despair leading to becoming a refugee and finding oneself alienated in a new environment. She shows that the threat of losing one’s identity in such transitional existence makes it even more important to respect fundamental values such as solidarity, loyalty, and humanity. All these aspects are included in her novel. This thesis works out the details through an in-depth textual analysis. The most important question to ask oneself in a transitional existence is whether you should remain or leave. This dilemma is equally evident in Volker Braun’s play. However Volker Braun includes in Transit Europa: Der Ausflug der Toten one entirely new dimension: he expands the historic situation to the present time. He establishes a strong criticism of civilization, of technical progress, that pollutes the environment and damages society. Braun shows that the transformation during a transitional situation may lead into a better world or into a more humane society; whereas Seghers emphasizes that even within the desperation of transit there lies the chance to be and to remain humane. After an overview of previous research on Transit and Transit Europa: Der Ausflug der Toten, there follows a definition of the theme transit; then a short introduction to the historical circumstances during the Third Reich and the GDR is provided. That is helpful because both texts include biographical and historical references to the lives of their authors. After this general part the text analysis itself will intensively examine the themes transit and transition. A comparison will show where Seghers’ and Braun’s concepts of transit as used in their texts run parallel and where they differ. The main conclusion of the analysis is that the transitional situation was not just relevant during the time of Anna Seghers’ exile but is also relevant in the present. Through the text of Volker Braun it becomes obvious that the topic will be ubiquitous in the future as well, since society is in constant transition.