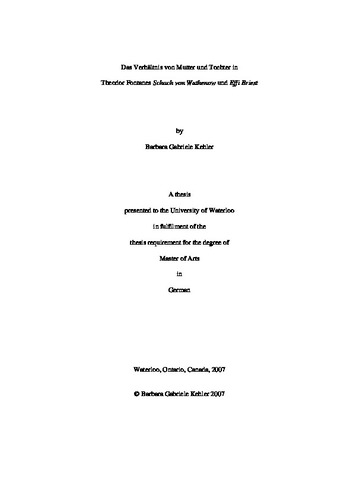 Theodor Fontane’s famous novel Effi Briest (1895) has been widely discussed in secondary literature, and every single aspect of the novel’s complex content and style seems to have been analysed; however, the similarities in content and style between Fontane’s Effi Briest and his less known and discussed work Schach von Wuthenow (1882) have not yet been recognized. A remarkable and meaningful similarity between the two regarding the content is the portrayal of a close relationship between mother and daughter which is strongly influenced by the latter’s relation to the mother’s (former) admirer. The relationship of Josephine von Carayon and her daughter Victoire and that of Luise von Briest and her daughter Effi will be compared by means of an analysis based on Michel Foucault’s theories on discourse, truth and power; in particular, the discourse of beauty, illness, honour and love will be closely examined. A method based on Foucault’s theories facilitates an analysis of the female protagonists’ actions that is free of moral implications for the protagonists are understood in their non-freedom of action owing to their discourse-constructed identity. Since the constellations of power in which the female protagonists are living cannot be analysed without the male protagonists’ influence, the constitution of Schach and Innstetten’s characters will be closely examined, too. The analysis of the discourse of beauty and illness shows that those disourses are portrayed as inseparably connected. In the society outlined by Fontane in Schach von Wuthenow, Victoire is made an outsider due to the pockmarks in her face; during the private conversation at Prince Louis’ castle, however, the prince calls Victoire a beauté du diable whose beauty is based on the survival of a fatal disease which has resulted in a passionate character. Innstetten, on the contrary, considers Effi to be particularly beautiful when she looks pale, lethargic and frail for he connects Effi’s ill appearance with his wife finally becoming a woman. Beauty, however, is exposed as a construct in both of Fontane’s works: on the one hand, by the (in itself) contradictory argumentations of the characters; on the other hand, by the narrators who criticize and disprove the prince’s idea of Victoire, which is temporarily accepted by Schach, and Innstetten’s connection of illness, beauty and femininity. The examination of the discourse of honour and love reaches the conclusion that both of Fontanes’s works portray honour as a construct with changing truth. In Schach von Wuthenow honour is exposed and critiziced mainly by Josephine, in Effi Briest mainly by Innstetten and Luise because these characters are aware of the identity-constructing quality of the demands made by society. Nevertheless, Innstetten submits his love for Effi to the claims by the disourse of honour; Luise, however, realizes in her love for Effi a part of her human essence. Luise’s love for her daughter is completely accepted since it is considered natural; thus it turns out to be beyond the demands of honour. Josephine also acknowledges the greater truth of parental love and retreats from her strong wish to live a life in harmony with society in favour of her daughter. By means of their female protagonists, Fontane’s story Schach von Wuthenow and his novel Effi Briest demand a re-evaluation of the discourse of love. Not the love between a man and a woman but the love of a mother for her daughter is portrayed as natural and is thus considered beyond any demands of the disourse of beauty and honour.