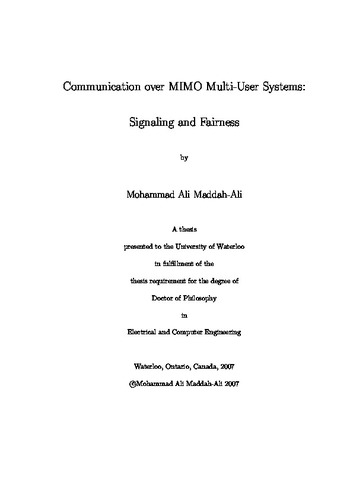 Employment of the multiple-antenna transmitters/receivers in communication systems is known as a promising solution to provide high-data-rate wireless links. In the multi-user environments, the problems of signaling and fairness for multi-antenna systems have emerged as challenging problems. This dissertation deals with these problems in several multi-antenna multi-user scenarios. In part one, a simple signaling method for the multi-antenna broadcast channels is proposed. This method reduces the MIMO broadcast system to a set of parallel channels. The proposed scheme has several desirable features in terms of: (i) accommodating users with different number of receive antennas, (ii) exploiting multi-user diversity, and (iii) requiring low feedback rate. The simulation results and analytical evaluations indicate that the achieved sum-rate is close to the sum-capacity of the underlying broadcast channel. In part two, for multiple-antenna systems with two transmitters and two receivers, a new non-cooperative scenario of data communication is studied in which each receiver receives data from both transmitters. For such a scenario, a signaling scheme is proposed which decomposes the system into two broadcast or two multi-access sub-channels. Using the decomposition scheme, it is shown that this signaling scenario outperforms the other known non-cooperative schemes in terms of the achievable multiplexing gain. In particular for some special cases, the achieved multiplexing gain is the same as the multiplexing gain of the system, where the full cooperation is provided between the transmitters and/or between the receivers. Part three investigates the problem of fairness for a class of systems for which a subset of the capacity region, which includes the sum-capacity facets, forms a polymatroid structure. The main purpose is to find a point on the sum-capacity facet which satisfies a notion of fairness among active users. This problem is addressed in the cases where the complexity of achieving interior points is not feasible, and where the complexity of achieving interior points is feasible. In part four, $K$-user memoryless interference channels are considered; where each receiver sequentially decodes the data of a subset of transmitters before it decodes the data of the designated transmitter. A greedy algorithm is developed to find the users which are decoded at each receiver and the corresponding decoding order such that the minimum rate of the users is maximized. It is proven that the proposed algorithm is optimal. The results of the parts three and four are presented for general channels which include the multiple-antenna systems as special cases.