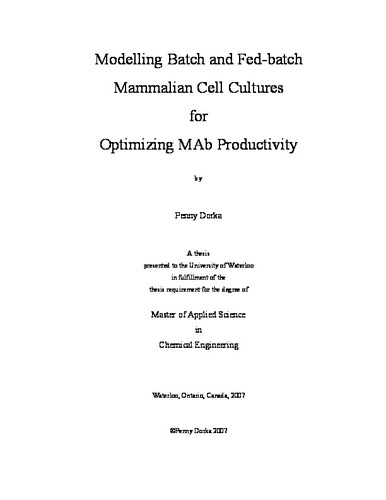 The large-scale production of monoclonal antibodies (MAb) by mammalian cells in batch and fed-batch culture systems is limited by the unwanted decline in cell viability and reduced productivity that may result from changes in culture conditions. Therefore, it becomes imperative to gain an in-depth knowledge of the factors affecting cell growth and cell viability that in turn determine the antibody production. An attempt has been made to obtain an overall model that predicts the behaviour of both batch and fed-batch systems as a function of the extra-cellular nutrient/metabolite concentrations. Such model formulation will aid in identifying and eventually controlling the dominant factors in play to optimize monoclonal antibody (MAb) production in the future. Murine hybridoma 130-8F producing anti-F-glycoprotein monoclonal antibody was grown in D-MEM medium (Gibco 12100) with 2% FBS. A systematic approach based on Metabolic Flux Analysis (MFA) was applied for the calculation of intracellular fluxes for metabolites from available extracellular concentration values. Based on the set of identified significant fluxes (from MFA), the original metabolic network was reduced to a set of significant reactions. The reactions in the reduced metabolic network were then combined to yield a set of macro-reactions obeying Monod kinetics. Half saturation constants were fixed empirically to avoid computational difficulties that parameter estimation for an over-parameterized system of equations would cause. Using Quadratic Programming, the proposed Dynamic Model was calibrated and model prediction was carried out individually for batch and fed-batch runs. Flux distribution for batch and fedbatch modes were compared to determine whether the same model structure could be applied to both the feeding profiles. Correlation analysis was performed to formulate a Biomass Model for predicting cell concentration and viability as a function of the extracellular metabolite concentrations in batch and fed-batch experiments. Quadratic Programming was applied once again for estimation of growth and death coefficients in the equations for viable and dead cell predictions. The prediction accuracy of these model equations was tested by using experimental data from additional runs. Further, the Dynamic Model was integrated with the Biomass Model to get an Integrated Model capable of predicting concentration values for substrates, extracellular metabolites, and viable and dead cell concentration by utilizing only starting concentrations as input. It was found that even though the set of significant fluxes was the same for batch and fedbatch operations, the order of these fluxes was different between the two systems. There was a gradual metabolic shift in the fed-batch system with time indicating that under conditions of nutrient limitation, the available energy is channeled towards maintenance rather than growth. Also, available literature with regard to cell kinetics during fed-batch operation suggests that under nutrient limited conditions, the cells move from a viable, non-apoptotic state to a viable apoptotic state. This is believed to lead to variations in antibody production rates and might explain inaccurate predictions for MAb obtained from the model proposed in the current work. As a result more detailed analysis of the system and in particular, the switch from non-apoptotic to apoptotic state is required. As a continuation of efforts to study the system in-depth, fluorescence imaging is currently being applied as a tool to capture the changes in cell morphology along the course of experimental batch and fed-batch runs. These experiments maybe able to elucidate the transition from non-apoptotic to apoptotic cells and this information maybe used in the future to improve the accuracy of the existing mathematical model.