Sun, Shell, Mirror: Hiding Spaces in the Court of France 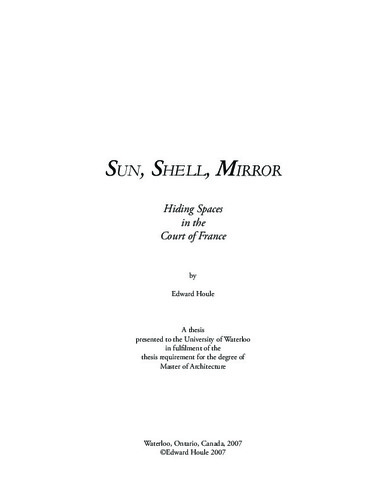 If privacy, and even secrecy, are critical components of the domestic interior, then what is the shape taken by the domestic architecture of people who must uphold high standards of individual transparency? Monarchs and aristocrats in absolutist France face such obligations, and the means they invest to create private and even hidden spaces in their houses and gardens during the late seventeenth and eighteenth centuries, the beginning of our own Modern culture, not only set some precedents for how we now understand our homes, but are revealing with regards to how people attempt to preserve their personal autonomy. This thesis is primarily, though not exclusively, interested in the erotic sub-culture of the royal court and the élite of Paris, which generates a great deal of architectural, literary, and visual examples. The noble tradition of personal display to justify power, most evident with the convention of the state bed, is expanded to its limit with Louis XIV, who curtails the intransigence of the nobility by making them dependent on their presence at his protocol-bound royal court, and consequently making his own life and person as visible as possible. However, this sacrifices considerable individual privacy for both courtier and monarch, and even Louis XIV eventually finds regular retreat in the appartment of the marquise de Maintenon, his solitude-cherishing second wife, incuring the resentment of his court in the process. After his death, aristocrats are obsessed with the private and sensuous amenities of their own houses while still upholding social requirements for display, resulting in the ingenious planning and expressive decoration of Rococo architecture. This is part of a larger cultural interest in hidden activity and intense sensation that also belongs to the erotic libertine novel; Louis XV is in some ways then an ideal king for this age, with his love of secret apartments and garden houses away from court obligations he hates, and with his string of powerful mistresses. However, so much indulgence and feminine power with a mediocre king ultimately stains the reputation of the monarchy, contributing to growing criticism of France’s government. Neoclassical architecture expresses the response to this, seeking to undo Rococo’s secrecy and duality, the Enlightenment’s renewed standard of personal transparency that is ideally required of all people, not just those in power. Marie Antoinette’s personality, however, is neither amenable to this standard nor to traditions of court publicity, and her own architectural follies reveal a desire to close off the outside world, sometimes literally. Nevertheless, with libertine culture having changed the reputation of the ruling class, Marie Antoinette’s privacy is interpreted as selfish, and though neither politically agressive or sexually promiscuous, speculations of her power and sexual appetite are enough to justify her loss of respect, and eventually, her execution during the French Revolution. She loses her right to rule because she, along with the rest of the court, are seen as too banal to hold such power. Therefore, the privacy and secrecy of the aristocratic domestic interior, breached by the speculations of libertinism and rejected by Enlightenment transparency, offers an outlet for their full personalities without compromising public appearance.